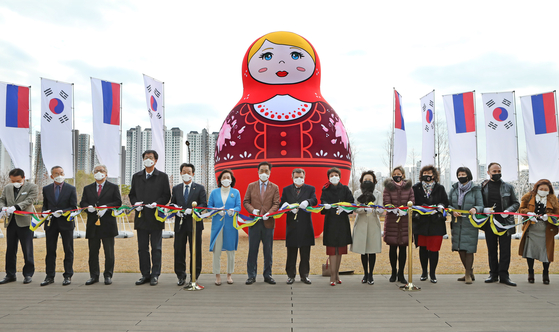 Russian Ambassador to Korea Andrey Kulik, center, Pyeongtaek Mayor Jung Jang-seon, to his right; and members of the Russian diplomatic community and the Pyeongtaek city government and city council take part in a ribbon-cutting ceremony at the Baedari Library in Pyeongtaek, Gyeonggi, on Thursday to kickstart Russian Culture Week. [PARK SANG-MOON]


Russian Culture Week kicked off at the Baedari Library in Pyeongtaek, Gyeonggi, on Thursday, with a host of activities planned including make-your-own traditional Russian matryoshka doll and a literature night featuring a classical concert and Russian poetry recitals.

“Last year marked the 30th anniversary of diplomatic relations between Russia and Korea, and in the 30 years of relations, the two countries have built a strong foundation for partnership,” said Andrey Kulik, Russian ambassador to Korea, in addressing the audience at the opening ceremony of the special culture week at the library on Thursday. “We believe that Russian Culture Week will make a great contribution to improving mutual understanding between the peoples of the two countries.”

Organized by the Pyeongtaek city government and Pyeongtaek International Exchange Foundation (PIEF), with the support from the Russian Embassy in Korea and the Pushkin House, the special cultural week will take place at the library through the end of Tuesday.

The event kicked off Thursday with performances by Pyeongtaek Children’s Choir, the children of Russian diplomats in Korea and Troika, a band of Russian traditional music. 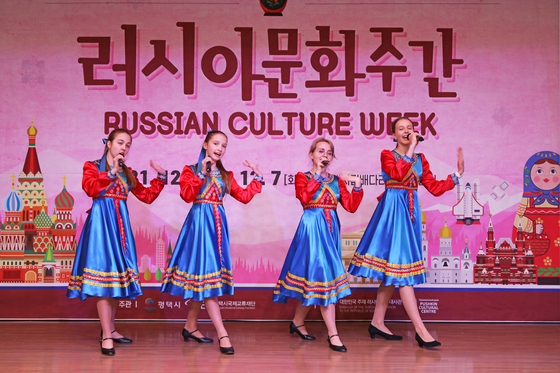 Children of the Russian diplomats in Korea perform at the opening ceremony of Russian Culture Week at Baedari Library in Pyeongtaek, Gyeonggi, on Thursday. [PARK SANG-MOON]


Highlight events will be held on the weekend, with a cooking class on the Russian traditional dessert kartoshka, led by a chef at the Russian Embassy in Korea, taking place from 2 p.m. to 3:30 p.m. Saturday at Pyeongtaek Agro-Ecological Park, about 15 kilometers (9 miles) west of the library.

On the same day at the library, a sand art performance of the Russian fairy tale “The Frog Princess” will take place from 3 p.m. to 4 p.m., followed by the Russian literature night. The literature night will begin with a classical music concert centered around “Pictures at an exhibition,” written by Modest Mussorgsky and performed by bass Lee Yeon-seong, who won the 1999 Russian Bella Voce international competition, and pianist Bang A-ram, followed by Russian poetry recitals.

On Sunday, a class on making matryoshka will be held from 2 p.m. to 3 p.m. at the library for participants to make their own traditional Russian doll.

“You can tell by the patterns on the dolls, in which region in Russia they were made,” said Ambassador Kulik.

The registration for attending literature night and the matryoshka class is open on PIEF's Facebook account through Friday. Registration for the cooking closed Wednesday.

Open every day during the event at the lobby, the library will also have materials for coloring activities for children on famous Russian architecture such as St. Basil’s Cathedral; Russian literature recommended by the Pushkin House, including translated works of Fyodor Dostoevsky, Leo Tolstoy and Maxim Gorky; and a photo exhibition dedicated to the Russian-Korean diplomatic relations.

Russia and Korea established diplomatic relations in 1980. The two countries designated 2020 and 2021 as the special year for cultural exchanges and co-hosted over 200 cultural events, both in person and online.

“Russia holds a special place in my heart as I was one of the staff members on the presidential trip to San Francisco in 1990 to mark the first-ever Korea-Russia summit meeting,” said Jung Jang-seon, mayor of Pyeongtaek, during the opening ceremony at the library on Thursday. “I am glad that we are able to host a cultural event dedicated to bilateral ties during my mayorship of the city. A week is too short a time to be able to share all the culture and history of Russia, but I hope that this event brings to the people of Pyeongtaek all things Russian that we can offer together.” 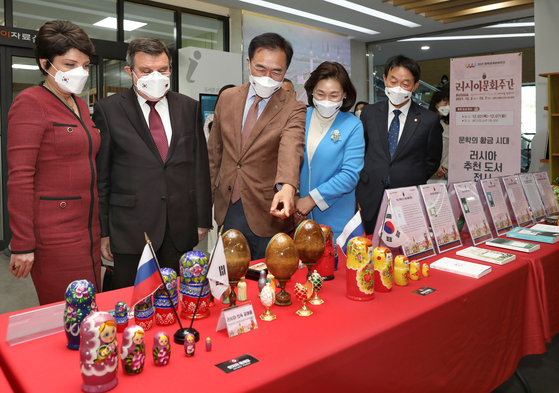 From left, Suanova Marina, wife of Russian Ambassador to Korea Andrey Kulik; Ambassador Kulik; Pyeongtaek Mayor Jung Jang-seon; and his wife Lee Seong-sook, observe the cultural objects of Russia including matryoshka dolls displayed at the Baedari Library in Pyeongtaek on Thursday at the start of Russian Culture Week. [PARK SANG-MOON]