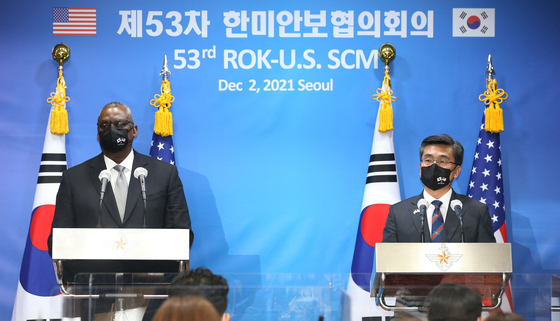 
The United States and South Korea will update their joint wartime strategy for the first time in 11 years to factor in North Korea's enhanced nuclear and missile weapons capabilities, the two countries' defense chiefs announced Thursday.

Current wartime operation plans (Oplans) 5027 and 5015 were drawn up in 1974 and 2010 and have faced criticism for being outdated in the face of recent developments in the North’s weapons programs, which are now believed to include nuclear arms, submarine-launched ballistic missiles, and hypersonic cruise missiles.

Oplan 5027 details the allies’ strategy to defend and counter-attack in case of a North Korean land invasion, while 5015 details over 700 targets in North Korea for pre-emptive strikes should hostilities break out.

However, Oplan 5015 focuses largely on neutralizing conventional attacks, which have diminished in importance as the North’s arsenal of nuclear arms and advanced missiles have grown.

The new SPG, which will authorize the allies to carry out a war plan written by the South Korea-U.S. Combined Forces Command (CFC), will incorporate the combined military capabilities of the United States and South Korea to respond to the North's use of either nuclear or conventional weapons.

In addition to the decision to adopt a new SPG, the defense minister and secretary agreed to conduct a full operational capability (FOC) assessment in 2022 for the pending transfer of wartime operational control (Opcon) to South Korea.

The FOC is the second phase of a three-part verification process to determine if South Korea is ready to lead the allies’ combined forces in wartime.

Although President Moon Jae-in wanted to accomplish the Opcon transfer before the end of his term next May, the scheduling of the FOC assessment for next year – following a long delay due to the Covid-19 pandemic – will likely leave the third and last part of the verification process, a full mission capability assessment, unfulfilled before he leaves office.

South Korea has not held wartime Opcon since the 1950-53 Korean War, when it handed all operational control over its troops to the U.S.-led United Nations Command. Opcon was subsequently transferred to the U.S.-led CFC when the command was launched in 1978.

The Opcon transfer was previously set for 2015 but was pushed back in 2014 as North Korea escalated its nuclear and missile weapons tests.

Another notable change in this year’s SCM joint statement was the mention of Taiwan, which has emerged as a sensitive issue and potential flashpoint in U.S.-China tensions in recent months.

Both Suh and Austin noted the importance of maintaining peace and security in the Taiwan Strait, hinting at an expanding scope of the U.S.-South Korea alliance to cover the wider region beyond the Korean Peninsula.

The mention of Taiwan in the SCM joint statement suggests that Washington is working to build support from its regional allies against China, which considers the island a renegade province and has vowed to use force to unify it with the mainland if it attempts to declare independence.

The joint statement by Suh and Austin also re-affirmed the U.S. commitment to maintaining its current number of 28,500 troops in South Korea.

Last year’s SCM statement did not mention the U.S. troop level amid disputes between South Korea and the administration of President Donald Trump over cost-sharing.

The defense minister and secretary also pledged to cooperate on the relocation of the CFC’s headquarters to the U.S. Army base Camp Humphreys in Pyeongtaek, Gyeonggi, 70 kilometers south of Seoul, by next year.

Following his meeting with Suh, Austin met with Moon at the Blue House in the afternoon.