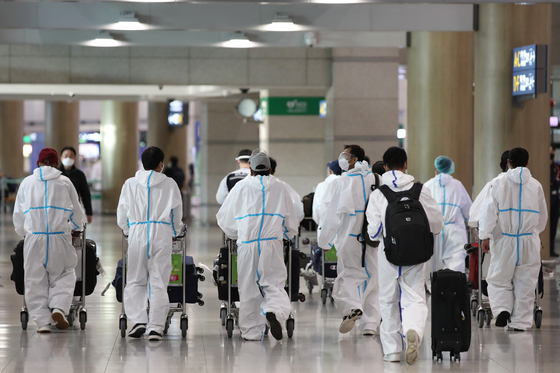 
Starting Friday, all people entering Korea from overseas will have to self-quarantine for 10 days regardless of their vaccination status.

In addition, Korea will close its borders to Nigeria along with eight other African nations. Korea's first five cases of the Omicron coronavirus variant are travelers arriving from Nigeria, and a person who had close contact with them.

The Central Disease Control Headquarters held a meeting Wednesday evening to discuss tighter immigration measures to block the Omicron variant of Covid-19 from getting to Korea.

Starting from Friday, all international arrivals will be required to undergo mandatory quarantine for 10 days regardless of whether they are vaccinated. That will be in effect for the next two weeks, or through Dec. 16.

Korean nationals and foreigners on long-term visas will be allowed to self-isolate at home, while foreigners on short-term stays of less than 90 days will have to quarantine at a temporary residential facility designated by the government. They must take a total of three Polymerase Chain Reaction (PCR) tests — before entry, on the first day after entry, and before their release from quarantine.

The government will also apply stricter rules for quarantine exemptions and only issue them for special reasons, such as attending a funeral within seven days or public duties of officials at an executive-level. Previous exemptions for immediate family visits or business purposes will not be allowed, health officials added.

Foreigners on short-term stays coming from Nigeria will not be allowed to enter Korea from Friday. The government had already stopped issuing visas and arrivals of non-nationals from eight other countries in southern Africa — including South Africa, Botswana, Zimbabwe, Namibia, Lesotho, Eswatini (formerly Swaziland), Mozambique and Malawi.

Korean nationals and foreigners on long-term stay arriving from the listed nations may still enter the country, but must self-isolate for ten days at a temporary residential facility and receive four PCR tests — before entry, on the first day after entry, on the fifth day after entry and before their release from quarantine.

Direct flights to and from Addis Ababa — the only direct flight between Korea and Africa — will also be suspended for two weeks, from Saturday through Dec. 17, reflecting heightened concerns over travelers coming from African nations.

The government plans to arrange non-scheduled flights for Korean nationals trying to get home from Ethiopia.

The new immigration measures came as Korea confirmed its first five cases of the Omicron variant.

On late Wednesday night, the Korea Disease Control and Prevention Agency (KDCA) reported the Omicron strain was detected in five people — a fully vaccinated pastor couple in their 40s who tested positive for the coronavirus after arriving from Nigeria, followed by their Uzbek-national acquaintance in his 30s who helped with their car ride from the airport and two other women in their 50s who also arrived from Nigeria — all living in the densely populated greater Seoul area, where half of the country’s population live in. The couple was fully vaccinated with the Moderna vaccine but the other three were not.

After finding five Omicron cases at once, health authorities remain on high alert as the variant of concern could already be spreading in the community, saying at least 105 people had been in contact with the infected patients as of Thursday afternoon.

Health officials confirmed Thursday that the pastor couple’s teenage son, as well as the acquaintance’s wife, mother-in-law and his acquaintance have tested positive for the coronavirus and are awaiting test results for which variant they have.

Officials said they are conducting Covid-19 tests on 45 passengers who were on the same plane from Nigeria on Nov. 23 — including six passengers classified as "close contacts" as they were sitting in front or behind the couple — as well as eight neighbors of the couple. One of the 45 passengers turned out to be positive, but was found to have contracted the Delta variant.

According to the local government of Incheon, however, the couple lied about taking a special taxi with strengthened quarantine measures from the airport to their home in Incheon. In fact, their Uzbek acquaintance drove them home. As a result, the acquaintance was omitted when tracing close contacts and didn’t have any restrictions for six days until he tested positive on Nov. 29. During that period, the man participated in a church program in Michuhol District in Incheon, attended by more than 400 people.

“We are strengthening measures with the possibility [of the variant spreading in non-capital regions],” said Park Young-joon, head of the epidemiological investigation team at the Central Disease Control Headquarters, in a briefing on Thursday.

The government is considering charging the couple with a violation of the infectious disease prevention act.

“People who have been contact with an Omicron patient will be required to undergo self-quarantine without exception for fully vaccinated people, and the period will be extended to 14 days from the original 10 days,” announced Jeong Eun-kyeong, commissioner of the KDCA on Thursday. She added that those infected with the Omicron variant will be transferred to a hospital or a treatment center instead of being allowed treatment at home.

While health authorities are scrambling to prevent additional transmissions of Omicron, an optimistic view of the new variant was raised by a Korean virologist. He says the variant could be a positive development if it causes milder illness and becomes the dominant strain, wiping out the Delta variant.

“When looking at the evolution of viruses, viruses and humans go through a co-evolution and adapt and coexist with each other […] and during this process, Omicron’s transmissibility may be stronger while its toxicity may decrease,” Oh Myoung-don, a professor at Seoul National University Hospital’s Infectious Diseases Department and head of the Central Clinical Committee for Emerging Disease Control, said in a phone call with the JoongAng Ilbo on Thursday.

“It is the best case scenario if Omicron becomes similar to the flu or a cold,” he said. “It can become a life saver if it crowds out the Delta variant.”

A similar claim was previously raised by professor Karl Lauterbach, who could become Germany’s next health minister, saying the Omicron variant could be a “Christmas gift” that could end the pandemic sooner if it causes milder illness, according to the Daily Mail newspaper.

Health authorities said Thursday that four of the country’s five Omicron patients are asymptomatic, and the other one having a mild fever. 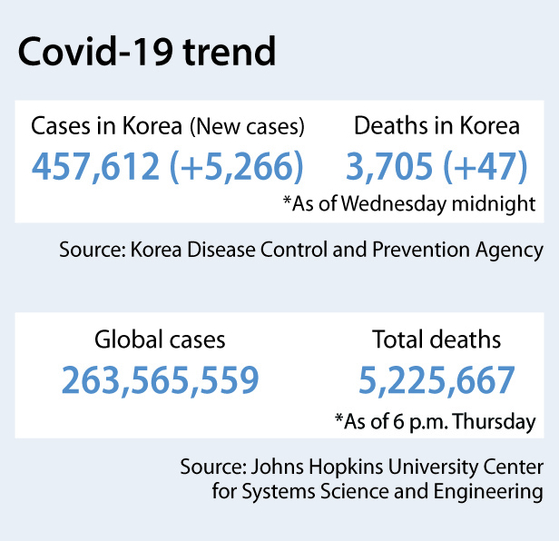 Amid the country’s first detection of Omicron, Korea reported another record-high number of Covid-19 cases, 5,266, on Thursday.

All cases but 24 were locally transmitted, bringing the total caseload to 457,612. The previous record was 5,123, set just a day prior.

Critically ill Covid-19 patients also reached an all-time high of 733, up by 10 from the previous day. Of them, people aged 60 or older accounted for 83.6 percent.

Forty-seven more people died of the virus, raising the death toll to 3,705.

Following the surge in new infections, the government is said to be considering stricter public health measures similar to the Level 4 measures under the previous social distancing scheme — limiting social gatherings to four people, or two after 6 p.m. in greater Seoul, and forcing businesses to close at 10 p.m.

Authorities are scheduled to announce their decision in a briefing at 11 a.m. Friday.