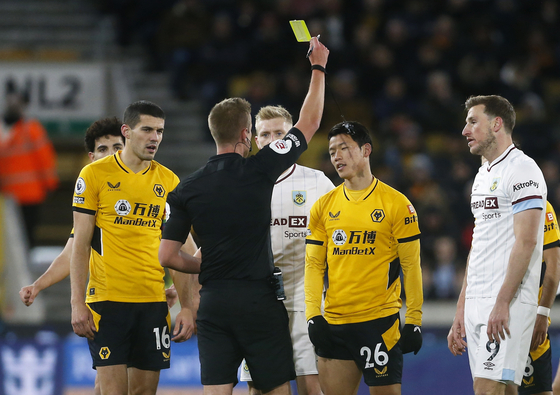 Wolverhampton Wanderers' Hwang Hee-chan is shown a yellow card during a game against Burnley at Molineux in Wolverhampton, England on Wednesday. [REUTERS/YONHAP]

Hwang received a yellow card in the 17th minute after a brief altercation with Burnley's Matthew Lowton.

Lowton elbowed Hwang while they were both in the air competing for the ball. The Burnley defender received a yellow card for the foul and Hwang was awarded a free kick. Hwang was also handed a yellow card after pushing Lowton following the foul.

Hwang stayed on the pitch until the 84th minute, when he was substituted for Francisco Trincao.

Wednesday's result was a disappointing one for Wolves, who sit 12 places above Burnley at No. 6 in the Premier League. Wolves have scored just five home goals so far this season, the joint-lowest in the league, alongside No. 19 Norwich.

Despite the recent offensive silence — both from Wolves and Hwang — interest in the Korean striker is still on the rise.

Wolves' rivals Leicester are the latest team to be linked to Hwang, who joined Wolverhampton at the end of August on loan for the entirety of the 2021-22 season.

According to Football Insider, sources at Wolverhampton say the club is keen to buy Hwang in January. But in order to facilitate a deal, the club would likely need to sell another reasonably big-ticket player to raise the funds for Hwang. Complicating things further, Liverpool and now Leicester are also reportedly keen to tie down The Bull in the January transfer window.