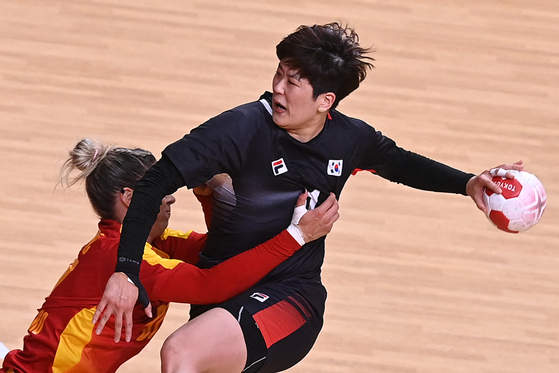 Ryu Eun-hee, right, is challenged by Montenegro's Majda Mehmedovic during the women's preliminary round Group A handball match between Montenegro and Korea at the 2020 Tokyo Olympic Games at Yoyogi National Stadium in Tokyo on July 31. [AFP/YONHAP] 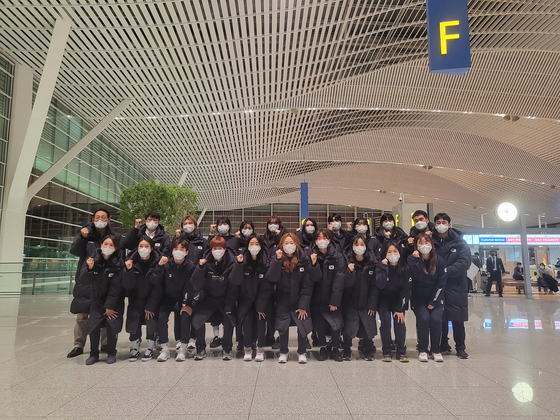 The Korean national handball team pose for a picture at Incheon International Airport before jetting off to play three friendlies against Russia, Norway and the Netherlands in Norway. [KOREA HANDBALL FEDERATION]

Korea is placed in Group F alongside Denmark, Tunisia and the Congo. Korea earned their spot at the championships at the 2021 Asian Championship in Jordan this September, alongside Iran, Japan, Kazakhstan and Uzbekistan.

At the 2021 Asian Championship, Korea took the gold medal after topping the group stage with four wins against Kazakhstan, Hong Kong, Uzbekistan and Singapore. Korea took a decisive 46-21 win against Iran in the semifinals, then beat Japan 33-24 in the finals.

Before the Asian Championship, Korea reached the quarterfinals of the Tokyo Olympics but missed out on a medal after a 39-30 loss to Sweden. Korea struggled in the preliminaries, losing their first match of the Games to Norway then the second to the Netherlands, before getting a win against Japan. Korea lost to Montenegro and drew against Angola. Korea advanced to the quarterfinals thanks to Japan losing to Norway.

Three-time Olympian Ryu Eun-hee will join the national team in Spain after skipping the Asian Championship. Ryu is a veteran player — she was only 15 when she was first called up to the national team and was still the youngest player on the team at the 2010 Asian Games.

Korea will play their first match against the Congo on Thursday at Palau d'Esports de Granollers in Granollers, Spain. Korea will then face Tunisia on Saturday and Denmark on Monday.