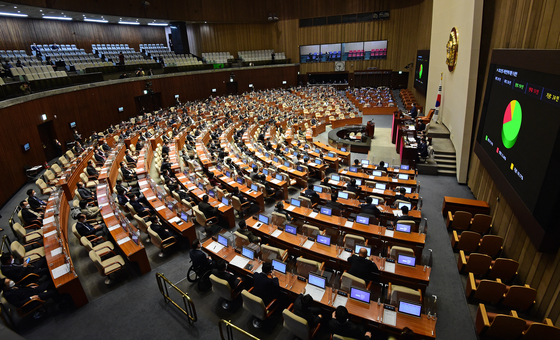 Lawmakers voting on the 2022 budget at the National Assembly in Yeouido on Friday. [YONHAP]

The National Assembly on Friday passed a 607.7 trillion-won budget for 2022.

The increases in the budget were especially focused on projects supporting the economy, including increases in compensation and loans for businesses affected by social distancing.

The budget is the version revised and pushed aggressively by the Democratic Party, which holds the majority.

The DP and the main opposition People Power Party failed to narrow their differences after negotiating until the last minute.

One of the key issues that the two sides couldn't agree on was DP's demand for an aggressive expansion in the issuing of community currencies.

DP Presidential candidate Lee Jae-myung has strongly pushed for an increase in the issuing of community currencies, as he has often claims success in boosting the local economy with the locally-issued currencies when he was Gyeonggi governor and Seongnam mayor.

The opposition party argued that the DP is just buying votes.

As the DP holds the majority, the budget for funding the community currencies more than doubled from 240.3 billion won to 605.3 billion won.

When planning for next year's budget, the government initially cut back sharply on community currency support from this year's 1.05 trillion won.

The government claimed that the local gift cards were only a temporary measure adopted during the Covid-19 crisis.

Funding allocated specifically for small business owners is up 2 trillion won in the final version to 10 trillion won. The budget particularly targets small businesses that deal directly with customers, including those in tourism, sports and transportation.

A total of 2.2 trillion won in compensation, up from 1.8 trillion won, has been allocated for small-shop owners whose businesses have suffered significantly. The minimum amount these businesses can receive has been increased from 100,000 won to 500,000 won.

A total of 1.2 trillion won has been budgeted to support 35.8 trillion won in low interest rate loans with rates set at 1 percent. The beneficiaries are the 2.13 million small business owners who are facing loan repayments or are unable to borrow more.

They will be eligible for a loan averaging 17 million won.

Some 400 billion won will be allocated to face-to-face businesses in the form of low-interest loan guarantees or vouchers.

Funding for the environment increased 12 percent to 11.9 trillion won.

With the government pushing for stronger tech-based industries and achieving carbon neutrality, the budget for industry, small companies and energy increased 9.4 percent to 31.3 trillion won.

The national debt is expected to grow to over 1,000 trillion won for the first time.

The Finance Ministry estimates it will 1,063.4 trillion won, up 11 percent. Debt to GDP will exceed 50 percent for the first time.

The fiscal deficit is expected to shrink on increases in revenue.