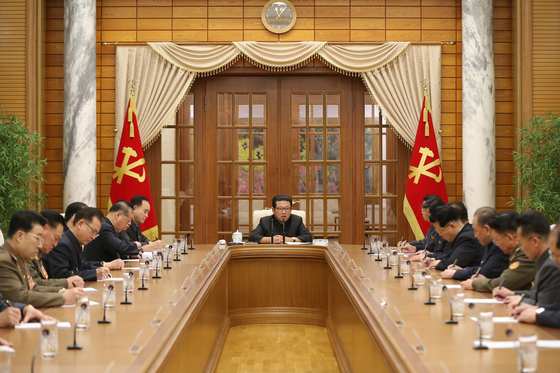 North Korean leader Kim Jong-un presides over a Politburo meeting at the Workers' Party headquarters in Pyongyang on Wednesday. [NEWS1]


North Korean leader Kim Jong-un sported a noticeably slimmed-down appearance and longer hair style in photos of a Politburo meeting of the reclusive regime's ruling party that he presided over on Wednesday, as reported by the party's newspaper.

Kim’s new look comes as the Workers' Party Politburo decided to convene yet another plenary meeting later this month to address the state of affairs in the nation.

The Rodong Shinmun, the newspaper operated by the Workers’ Party of Korea, reported that the Politburo meeting took place at the party’s Pyongyang headquarters.

“Chairman Kim led the meeting and delivered decisions on the party’s general tasks,” the paper reported on Thursday.

However, the decision at Wednesday’s Politburo meeting will mean the country will hold its fourth plenary meeting of this year later this month, reflecting the continuing state of economic crisis in the North as a result of its self-imposed border closures since January 2020 to block the spread of Covid-19.

Kim’s appearance at the most recent meeting struck a contrast from other recent photos.

Although the photos of the meeting captured Kim at the far end of room, close examination shows that the North Korean leader has lost a remarkable amount of weight.

His jaw and chin are much more defined and he has grown his previously shaved sideburns, creating the appearance of a fuller head of hair.

The top part of his hair is still combed back, as per his signature hairstyle.

Reports on Kim’s public activities have been scant in recent months, with the leader making no appearances reported by the regime's state-run media between Oct. 11, when he visited a defense exhibition in the capital, and Nov. 16, when he visited construction sites in Samjiyon, Ryanggang, one of the North’s remote northern provinces.

A government official who spoke to the JoongAng Ilbo, an affiliate of the Korea JoongAng Daily, on the condition of anonymity said reports of Kim’s infrequent public appearances are likely part of an effort to project the leader’s active role in running the country.

He also added that the newly announced plenary meeting will likely discuss outside developments, such as Seoul’s push to achieve a formal declaration to terminate the 1950-1953 Korean War, which only ended with an armistice and not a peace treaty.

“Kim has a habit of making himself scarce before announcing major decisions, and this instance fits that pattern,” the official said.