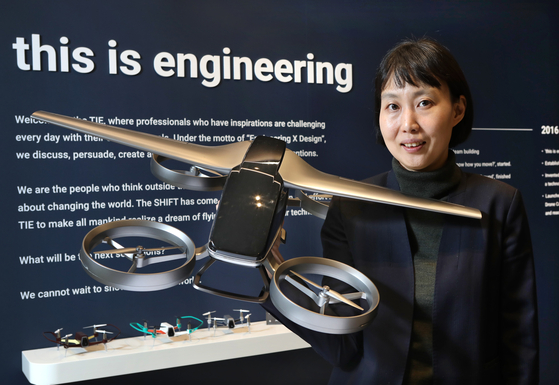 Hong Yoo-jung, founder and CEO of an air mobility start-up, this is engineering(TIE), poses with a miniature aerial vehicle at the company's office in Seongnam, Gyeonggi on Nov. 23. [PARK SANG-MOON]


Hong Yoo-jung, founder and CEO of an air mobility start-up named this is engineering (TIE), spent her childhood taking apart various machines like radios and clocks to try and figure out how they work.

That fixation on parts and mechanisms grew more serious when she started studying aerospace engineering at Seoul National University. But her life-long goal eventually took shape around a machine that does not yet exist: The flying car.

The 37 year-old entrepreneur established TIE in 2016 to develop urban aerial mobility vehicles and drones. TIE has secured 12 billion won ($10 million) in investment from financial institutions including SBI Investment, the Korea Development Bank, and KB Investment, and the government added it to the list of high-potential start-ups eligible for up to 10 billion won in loans with favorable interest rates and conditions.

What brought you to found TIE?


I’ve taken a keen interest in flying objects for a long time, the concept is just really attractive to me. The interest led me to major in aerospace engineering, too. My initial vision was not entirely about drones; I was drawn in by the imagery of flying cars, envisioning that they will become reality someday. So, founding a company was never the goal. Rather, it is the result of the process of following my dreams.

I think that passion is somewhat related to my childhood, where I enjoyed disassembling and reassembling objects or inventing new things. One of the inventions was an alarm device powered by an integrated circuit I took from a separate digital clock and reassembled.


As fascinating as a flying car or air taxi may be, the related technology is in its nascent stage. Can you explain how close TIE has come to commercializing any kind of personal air vehicle?


A prototype of our personal air vehicle (PAV) is 20-30 percent complete until we reach the stage of test-operating the vehicle. We plan to test fly the first prototype PAV in the second half of next year in a joint project with Gangwon provincial government. The project aims to explore different use cases involving the PAV such as rescue tasks and detecting wildfires. If we could successfully demonstrate the use cases, we will be able to sell the aerial vehicles to government agencies and private companies looking for the roles.

The ultimate goal is to make PAVs an alternative transportation option to consumers, just like automobiles are today, but faster. But that will take some time because the technology needs to be mature to ensure safety alongside the introduction of infrastructure and a regulatory framework. Before we get to the point, they will be used in logistics or as a taxi service.

Still, those aircrafts require substantial power and existing batteries might not be sufficient to fulfill the power requirement. How can TIE overcome that challenge?

The prototype we are making will use batteries, but in our roadmap, PAVs powered by liquid hydrogen come next.

Liquid hydrogen is able to provide higher onboard electric power and energy density. To take a leap for extending the flight time of PAVs, better power options like hydrogen are critical.

But for hydrogen-based PAVs, it is almost impossible for us to develop and manage a hydrogen power system from scratch. So, we are on the lookout for companies that specialize in that power source that we can work with.


Before the development of PAVs, the drone business should be an important revenue source for TIE. What is your focus in that area?


We’ve rolled out consumer drone products under the brand “Shift Red” in Korea and other markets including the United States, Europe, Singapore, China and India.

What differentiates the drone from its competitors is the controller with a small thumb ring, which allows users to fly the drone with single hand.

We are now expanding the drone business by jumping into drone delivery. We are in discussion with retailers in Korea and overseas to carry out delivery services using our drones.

When it comes to global markets, we are targeting the United States, Australia and Europe for drone delivery services. In Australia, the regulatory environment is favorable compared to other countries, while the United States has a big market potential due to its size.


Bringing newer technology like drones into different businesses often faces regulatory hurdles. How do you rate the Korean government’s understanding of the industry?


We talk with government officials through an association representing drone and air mobility start-ups. The government is trying to hear what we have to say, but there are new regulations introduced this year such as requiring certified licenses for people to fly a drone.

But to revive the industry, such an approach is not ideal. In the beginning, the government could take a conservative stance because there could be unanticipated risks from flying drones. Now that the technology has improved, the direction should shift toward fostering the application of drones in a broader range of settings.

Glimpse of the future