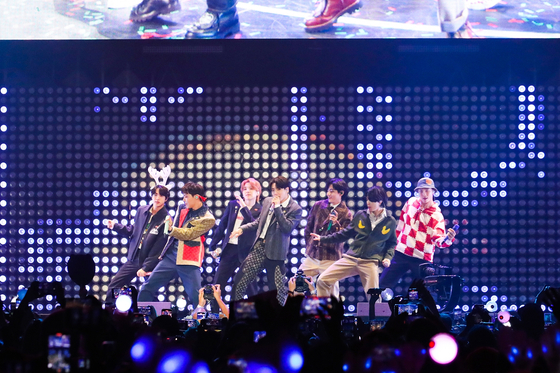 BTS performs as the opening act at the annual ″Jingle Ball″ concert at The Forum in Los Angeles, held by the Los Angeles radio station KIIS-FM, on Friday night. [BIT HIT MUSIC]


K-pop boy band BTS kicked off the annual "Jingle Ball" concert in Los Angeles on Friday and was presented with a birthday surprise for Jin, a member of the septet who turned 29 on Saturday.

BTS performed at The Forum in Los Angeles on Friday night as the opening act of the annual event held by Los Angeles radio station KIIS-FM. The band chose to perform two of their hit English songs.

The first song was “Butter,” which was recently selected as the U.S. entertainment magazine Variety’s Hitmakers Record of the Year and also topped the Billboard Hot 100 singles chart for 10 weeks earlier this year.

After the first performance, as the members took some time to speak to the audience, the KIIS FM staff brought out a birthday cake for Jin, whose real name is Kim Seok-jin, and encouraged the audience to sing "Happy Birthday" to him. 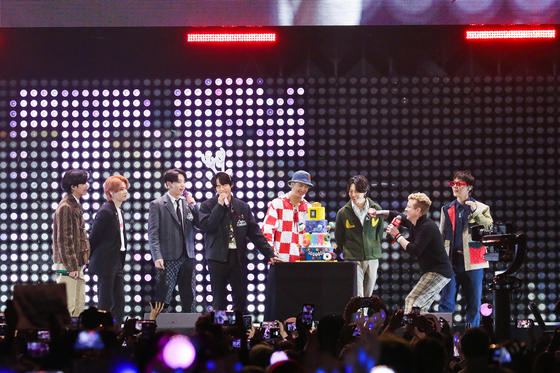 BTS members look at a birthday cake for Jin, fourth from left, on the stage at the ″Jingle Ball″ concert at The Forum in Los Angeles on Friday night. [BIT HIT MUSIC]


After an emotional moment, the members finished their performance with a holiday remix of “Dynamite.” The original song was released in 2020 and became the band’s first Billboard Hot 100 No. 1 single.

Meanwhile, the U.S. music magazine Billboard said on Friday the ticket sales for BTS’s recent Los Angeles concerts recorded the largest Boxscore, or gross sales for a run of shows at a single venue, since 2012 and “the sixth best-grossing engagement in Billboard Boxscore history.”

BTS’s four night concerts held at the SoFi Stadium in Los Angeles between Nov. 27 and Dec. 2 sold 214,000 tickets, raking in $33.3 million in total, according to the magazine.

“Remarkably, the five engagements that have out-grossed BTS throughout Boxscore history were each at least twice as long as BTS’ four-show sweep,” the magazine said.