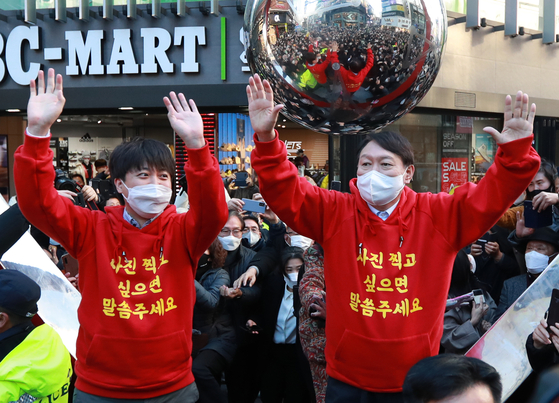 Lee Jun-seok, left, chief of the main opposition People Power Party (PPP), and Yoon Seok-youl, the party’s presidential nominee, wave to the crowd in matching red hoodies in the streets of Busan Saturday, after their reconciliatory dinner meeting in Ulsan the night before. [YONHAP]

Lee, who had canceled all official activities as PPP chairman since Tuesday and embarked on a personal regional tour, met with Yoon for a dinner meeting in Ulsan, also attended by PPP floor leader Kim Gi-hyeon, a former mayor of the coastal city, to iron out their differences.

The two appeared in media in front of the restaurant after two hours, embracing each other, and a spokesman said Yoon, the party chief and floor leader agreed to "closely share all matters related to the election and strengthen direct communication."

Yoon also announced that so-called conservative kingmaker Kim Chong-in, a former PPP interim head, had agreed to take on the role of general chairman of the party's election campaign committee after initially refusing to take part amid disagreements over how the campaign should be run.

Lee spent the past four days in Busan and Jeju, while Yoon had been on a Chungcheong tour that week. The two had clashed for weeks on appointments to the election committee, communication and scheduling matters amid speculation that Lee was being sidelined by Yoon's key election campaign officials.

Lee openly vented his frustrations to media Thursday while on a visit to Jeju and openly criticized Yoon, stating that the "party chief is not a servant to the presidential candidate," while stressing he had never rejected his leadership duties.

In an apparent move to appease the PPP head, Yoon said ahead of the Ulsan meeting Friday, "I am very fortunate to embark on a journey as a presidential candidate with the youngest party leader in the history of our political party, the kind who appears once in 100 years."

Thus, Lee and Yoon's Friday meeting overcoming their falling out was labeled as a "dramatic reconciliation" by media as the PPP leadership appears to be showing its commitment to a one-team strategy ahead of the March 9 presidential election and putting behind their recent infighting.

In a show of unity, Lee and Yoon visited Busan Saturday and convened an election committee meeting.

They also greeted crowds in the Busan streets, wearing matching red hoodies emblazoned with yellow letters that read: "Ask if you want a photo with us," and took selfies with supporters. The matching hoodies were prepared by Lee.

Remarking on the hoodies, Yoon told reporters Saturday, "I will fully accept any plans and decisions made by Chairman Lee, and if he tells me to run while wearing such outfits, I will do so," in a gesture to show he is ready to listen to the PPP chief's proposals.

PPP officials point out that there had been preparation behind the scenes by senior politicians to enable to the Ulsan reconciliation and finally bring Kim Chong-in on board. Kim is expected to take on his role as general chairman overseeing the whole organization of the campaign starting Monday and was said to have agreed to take on the role over the phone with Yoon Friday.

Yoon and Kim previously met at a restaurant in Seoul on Nov. 24, which didn't go well, but the two sides appeared to have continued to work toward resolving their differences. 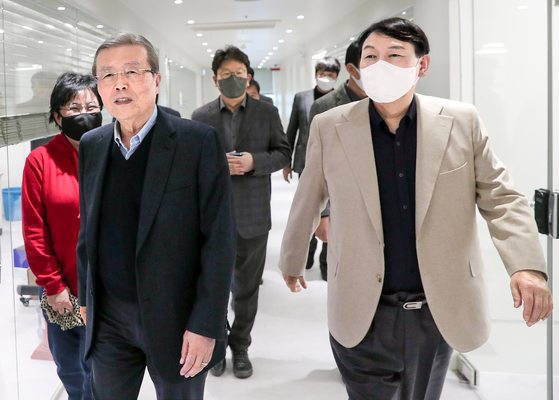 Yoon in a Facebook post Sunday wrote, "In the process of forming the election committee, there was unintentionally a lot of pain, and it caused anxiety and worry to the party members and the people," expressing his "regret" over this.

He referred to his trip to Busan with PPP chief Lee and Kim Chong-in's decision to become general chairman, calling it a day to "reconfirm the desire for a change in administration." Yoon added he will "not be conceited" and instead approach the election campaign with a humble attitude.

Yoon said he will show the "strength of unity" through an election committee led by Kim Chong-in, with standing co-chairs Lee Jun-seok and Kim Byong-joon.

Kim and Yoon held a 30-minute closed-door meeting in Yeouido, western Seoul, Sunday, ahead of the official launch of election campaign committee Monday. Yoon told reporters they talked about "politics" but said he couldn't recount all the specifics.

With Kim Chong-in assuming the post as the one-top chief of the campaign, the roles of Yoon's close aides Kim Byong-joon and Kim Han-gil, head of the "new era preparatory committee," will likely be reduced.

Yoon, a former prosecutor general under the Moon Jae-in administration, has advocated an all-encompassing election campaign, including people of different beliefs fighting for the same objective.

However, Kim and Lee reportedly wanted Yoon to have a clear stance from the beginning and move in that direction with unity, in a more streamlined manner; thus, it is still to be seen whether the leaders of the election committee can resolve their differences.