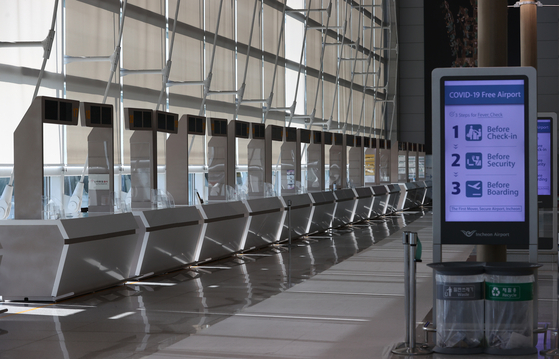 
International flights to and from Korea are being affected by the rapidly evolving reaction to the new Omicron variant of Covid-19.

Budget carrier Air Seoul was planning to start Incheon-Guam flights on Dec. 23 after a 660-day gap, but postponed the start to Jan. 29 following the spread of the Omicron variant.

Guam, a popular travel destination for Koreans, has not signed a travel bubble agreement, or an arrangement between two or more countries to open their borders to travel without quarantines.

Air Seoul plans to change bookings and or give full refunds to people who bought tickets.

Jeju Air, the largest budget carrier in Korea, canceled all seven flights between Incheon and Guam scheduled from last Saturday to Dec. 16.

After resuming the Guam route on Nov. 25, Jeju Air was scheduled to fly to Guam four times weekly in December. Flights are scheduled to go back to four times a week after Dec. 16, but may be reduced depending on the virus situation.

Another budget carrier, T’way Air, also suspended its Incheon-Guam flights for next week.

Jin Air, which currently operates the Incheon-Guam route four times a week, canceled its flights for Dec. 8 and 10 and reduced the frequency to twice a week.

Asiana Airlines originally planned to resume operation of its  Guam route on Dec. 23, but that plan may be postponed.

The outlook for other international flights is iffy following the emergence of the more transmissible Omicron variant.

To block the new strain from getting to Korea, all international arrivals are now required to undergo mandatory quarantine or self-isolation for 10 days regardless of whether they are vaccinated. That rule went into effect last Friday and runs through Dec. 16.

After five people tested positive for the Omicron strain on Dec. 1, cases continued to grow and three more were detected on Sunday, bringing the total to 12.

Health authorities remain on alert as three of the confirmed patients were found to have participated in a church program in Michuhol District in Incheon on Nov. 28, visited by almost 780 people on that day.

The government reported a total of 26 suspected cases of the Omicron variant as of Saturday midnight.

Korea decided to put a halt into its gradual return to normalcy and implement stricter social distancing measures following a surge in new Covid-19 cases and the emergence of the more transmissible Omicron variant.

“The government will focus on filling the gaps made during the [“With Corona”] period and strengthen the embankment of quarantine for the next four weeks,” Prime Minister Kim Boo-kyum said last Friday.

Exemptions to the limits on social gatherings will remain for families living under the same roof or caregivers of children, the elderly or handicapped people.

The measure is scheduled to take effect Monday for four weeks, and the government said the period may be changed depending on the virus situation.

Quarantine passes can be a vaccination certificate, a negative Covid-19 test result issued within 48 hours, proof of Covid-19 recovery within six months or a doctor’s note for people who are medically exempt from vaccinations. They were previously required when entering places deemed as prone to virus infection, such as noraebang (singing rooms), nursing homes, indoor sports facilities, bathhouses, clubs and bars that allow dancing, or certain movie theaters that allowed eating. The government will allow a one-week grace period for penalties from Dec. 6 to Dec. 12 to minimize public confusion.

Although the government considered limiting business hours or imposing shutdowns, it said it decided against them because of the impact on small businesses and the economy.

The introduction of adolescent vaccination passes comes despite a low vaccination rate among teenagers, which stood at 31.2 percent as of Saturday midnight. With the new measure, minors aged 12 to 18 must carry a vaccination proof or a negative virus test result when going to hagwon or libraries.

The government’s announcement drew some ire from parents and students, who called it a vaccine mandate for students.

Ms. Yoon, a parent of a high school student, said, “I am hesitating to vaccinate my son for vaccine safety and reliability reasons.

“Almost all children or teenagers in Korea attend at least one hagwon, but applying the vaccine pass system in those places is practically forcing them to get vaccinated,” she said.

A 16-year-old high school student surnamed Seo said, “I often go to a study cafe to revise or prepare for my exams, and I personally find it absurd to require a vaccine certificate in those places where virus transmission is hardly possible with everyone wearing a mask and studying.”

A Blue House petition opposing the government’s expanded quarantine pass system was signed by more than 194,000 people as of 5 p.m. Sunday.