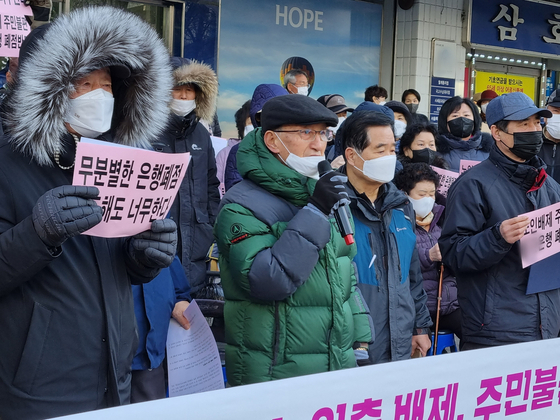 Elderly customers of a bank branch in Nowon District, northern Seoul, protest the bank's decision to close the branch on Dec. 3. [LEE GA-RAM]


On a cold Friday afternoon, dozens of senior citizens gathered around an apartment complex in Nowon District, northern Seoul, to protest the closing of a Shinhan Bank branch near their homes.

The branch at the apartment complex will be closing in the next few months and become a "digital lounge," which is operated without staff. A notice at the branch said customers can consult with bank employees via videoconference and also handle basic banking via kiosks.

If the customers want to go to a branch and speak with bank employees in person, they will have to travel 700 meters (0.43 miles).

The futuristic bank branch did not cut it with the elderly assembled on the chilly December day.

"What are old people supposed to do if the bank dumps employees and makes them bank with something called a kiosk?" said a 76-year-old apartment-complex resident who has been a customer of the bank for 30 years.

Cha Eun-ja, 87, said "it would be too difficult for the elderly if the branch suddenly closes as we have been depending on employees for even the most basic banking, such as cash deposits and withdrawals."

A group of residents living near the bank formed a committee at the end of last month to protest the bank's plan. According to the committee, the branch is used by about 8,000 households. 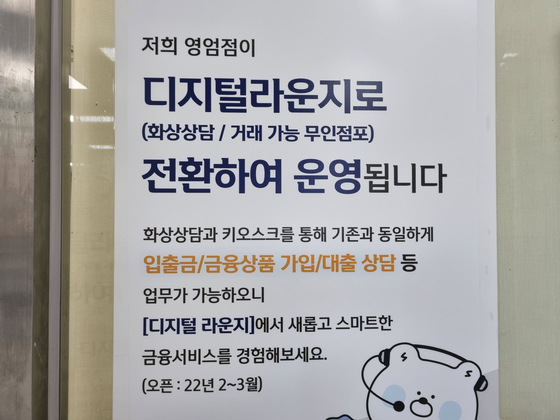 A notice put up at a bank branch in Nowon District, northern Seoul, on Dec. 3 says the branch will be transformed into a so-called digital lounge, where human employees will no longer be there for customers at counters and instead the customers can meet with bank staff via videoconfernece or process banking by themselves using kiosks. [LEE GA-RAM]


The committee argued that the plan is devastating for the elderly who are not used to digital technologies and devices and that this could expose them to phishing scams.

On Friday, the committee protested and held a press briefing, issuing a statement against Korean banks that have been reducing the number of branches over time.

"Banks closing down their branches in haste is a nationwide problem," said 41-year-old Kang Mi-kyung, co-head of the committee formed by residents, during the press briefing. "Banks have a social responsibility to serve the public as banks process numerous financial transactions that are crucial to people's lives."

"Banks are reducing the number of branches, but their plans are insufficient to support the group of customers that are being alienated by the move," Kang added.

The committee said it will meet with relevant lawmakers to discuss the issue and also meet with the bank's management to push them to come up with back-up measures for the affected elderly people.

"We are aware of the requests by the elderly customers in the area, but no decision has been made thus far about the ongoing issue yet," a spokesperson from Shinhan Bank said, adding that rather than completely closing down the branch, transforming it into a digital lounge is one of compromises they came up with for the residents using the bank in the area.

According to Shinhan, it is currently operating two digital lounge-type branches since the concept was first introduced in September, and the operations have been successful.

"There are no human employees at bank counters, but we arranged staff to help customers having difficulty using digital devices at the lounge," the spokesperson said.