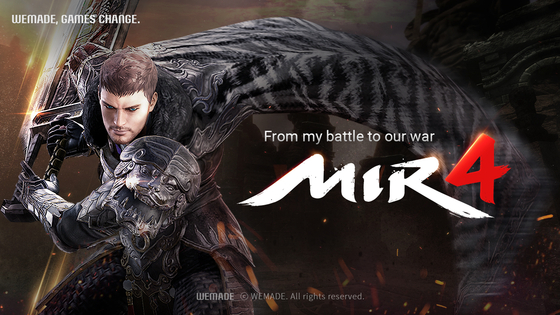 
Shares of game maker WeMade plunged by over 10 percent Monday following a steep fall in bitcoin prices over the weekend.

Shares of Kosdaq-listed WeMade had more than three-folded from around 70,000 won ($60) at the end of September to over 240,000 won last month, largely boosted by the success of its latest online game Mir4 launched in August.

The game drew in interest as it was created based on the play-to-earn model using non-fungible tokens (NFT). NFTs are blockchain-based proof of digital asset ownership. An NFT game allows players to earn game items while playing and make real money from them.

Though the game is not serviced in Korea as generating profit through gameplay is illegal here, it received a lot of interest from the global market and the company's shares quickly grew in popularity due to the potential of the NFT technology.

The company's shares were directly affected by the fall in the price of bitcoin, the mainstream cryptocurrency based on blockchain technology.

While analysts said the major trigger was signals of monetary tightening by the U.S. Federal Reserve and economic uncertainties created by the Omicron variant, Charlie Munger, vice chairman of Warren Buffet's Berkshire Hathaway, added to the fire by criticizing the crypto market, saying he wishes cryptocurrencies had never been invented, according to the Sydney Morning Herald. The news had spread a day before bitcoin tumbled.

Bitcoin prices partly recovered Sunday. On Monday as of press time, bitcoin traded at $47,977, down 2.5 percent from 24 hours earlier, according to data from CoinMarketCap.

"The recent rise in WeMade shares was affected by the NFT boom," said Lim Hee-seok, an analyst from Mirae Asset Securities. "With the recent plunge in bitcoin prices, [WeMade's shares] cannot be free from the fluctuations in the cryptocurrency market."

WeMade was not the only game maker affected. Other NFT-themed game maker stocks also fell on Monday.

Gamevil ended Monday with a 14.29 percent plunge, while Come2us fell 7.83 percent. These game makers had recently shared plans to launch NFT games in the near future.

"Volatility in the financial markets could expand as uncertainties spurred by the Omicron variant are yet to be resolved while other issues pop up, such as a plunge in the crypto market and default risks by China's Evergrande," Park Sang-hyun, an analyst from Hi Investment & Securities, wrote in a report Monday.