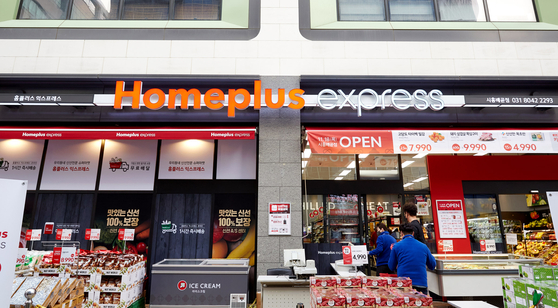 
Homeplus is investing in stores to boost online sales.

The company said Monday that it plans to open as many as nine Homeplus Express supermarkets by the end of the first half of next year with the goal of strengthening quick commerce.

Homeplus opened a new branch in Siheung, Gyeonggi, last month. It was its first supermarket in six years.

The new supermarket plan is a clear break with the past. The number of Homeplus Express stores fell from 365 in 2017 to 333 as of November.

Homeplus said that investing more in stores has become important for it to “confront the shock caused by Covid-19.”

For the discount mart business, Homeplus plans to add more groceries at 17 of its stores by the end of the first half of next year by renovating the space centered on fresh produce.

The company said that it hopes to increase footfalls at stores by adding more fresh produce, the top-selling category, and reducing the area selling non-food products.

Homeplus said it is in the process of hiring 330 new employees to work at stores.