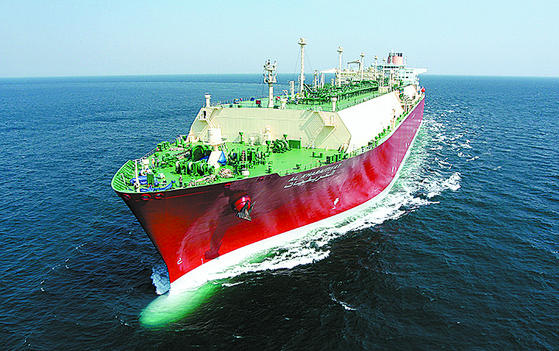 
Both major and mid-sized shipbuilders' orders are on the rise as demand for liquefied natural gas (LNG) carriers grow.

Those are more than double last year's orders of $21.1 billion.

Among the total, KSOE accounted for $22.5 billion, logging orders for 224 vessels. That is 151 percent of the company's annual target of $14.9 billion. Industry insiders expect it to possibly receive orders worth $25 billion by end of year considering container ship orders often come in at the end of year.

DSME’s bagged orders are worth $10.8 billion, which exceeded its annual target of $7.7 billion by 140 percent. The orders are for 60 vessels. This is the first time the company’s annual orders surpassed $10 billion since 2014.

SHI received orders for 75 vessels worth $11.2 billion, surpassing its annual target of $9.1 billion by 123 percent. 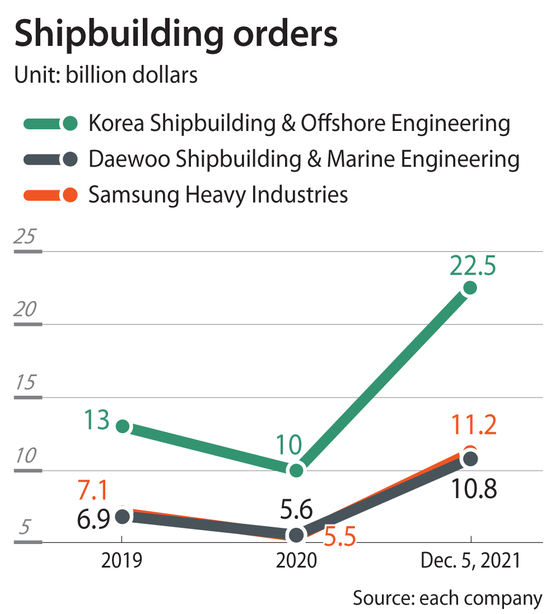 Shipping demand is rising as the global economy recovers from the pandemic, pulling up demand for container ships. LNG carrier orders have also helped, rising as many companies try to cut carbon emissions.

“Orders for container ships this year increased by five times compared to last year,” said Choi Jin-myung, an analyst at NH Investment & Securities. “A boom in the logistics sector caused the shipbuilding industry to grow rapidly."

Although Korea is leading in terms of LNG ships, China had the largest amount of overall shipbuilding orders: 48.7 percent of global orders compared to Korea's 37.7 percent.

With surging orders, local shipbuilder dockyards are booked up until 2023. Many say this is a good time for companies to increase contract prices rather than focusing on getting as many orders as possible.

“Container ship prices rose this year, but LNG carriers and oil tankers not so much,” said analyst Choi. “The dock slots are full for about three years, and shipbuilders could try to increase ship prices now.”

The number of orders may slightly slip next year.

“Because there were so many orders this year, next year's orders could fall by some 25 percent,” said a spokesperson for a shipbuilding company. “But still, the number of orders won’t be that bad compared to orders received in the past five years.”