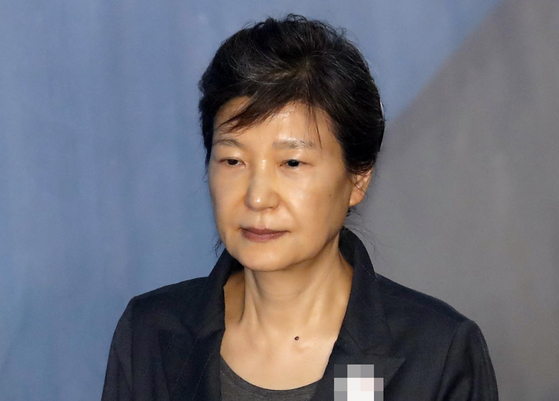 “There will be no pardon for politicians, including former presidents," the source, a high-ranking Blue House official, told the JoongAng Ilbo on condition of anonymity.

The official cited public opinion, which is against pardons for former presidents.

The source added that the idea is unpopular not only with the general public and the ruling Democratic Party, which was the opposition during the administrations of former presidents Lee and Park – both jailed for corruption – but even with the main opposition People Power Party (PPP), which worries that a pardon for either could be deadly for its chances in the March presidential election.

Both Lee and Park hailed from the Saenuri Party, the PPP’s immediate predecessor before it was reorganized following Park’s removal from office.

Mass protests against Park and her close friend and confidante Choi Soon-sil led to Park's impeachment by the National Assembly in December 2016 and the Constitutional Court's decision to confirm the lawmakers' decision in March 2017.

Park was sentenced to 24 years in prison after a Seoul court in April 2018 found her guilty of 16 charges of corruption and power abuse. She and Choi were found to have collected or demanded 23 billion won ($19 million) in bribes from three major conglomerates, including Samsung.

An appeals court in August 2018 said Samsung offered 8.7 billion won to help win government support for an attempt by Samsung’s current chairman, Lee Jae-yong, to cement his control of the group with a merger.

Her convictions were upheld by the Supreme Court in January.

Lee, her predecessor, saw his 17-year prison sentence for embezzlement and bribery confirmed by the Supreme Court in October 2020.

A Seoul court convicted Lee in October 2018 of amassing 8.5 billion won in bribes from various sources — including Samsung — before and after he took office.

The court also ruled that Lee, a former Hyundai executive, masked his ownership of an auto parts maker under relatives’ names and embezzled 24 billion won from the company between 1995 and 2007.

“The Blue House has taken into account the opinion of both ruling and opposition parties,” the Blue House source said.

“Swing voters, especially those in the 2030 generation, are absolutely opposed to pardons [for Lee and Park].”

According to a survey conducted by Gallup Korea from Nov. 2 to 4, opposition to pardons for Lee and Park ran highest among those in their 20’s and 30’s, with 69 percent and 71 percent opposed respectively.

Among self-identified moderate voters, those opposed to pardons comprised 50 percent, compared to 42 percent in favor.

Opposition to pardons also ran higher among individuals with no party affiliation, with 56 percent opposed compared to 25 percent in favor.

The survey by mobile phone of 1000 individuals over the age of 18 had a 3.1 percent margin of error and a 95 percent confidence level.

“When you look at the general opposition to pardons [for the former presidents], it is clear why there is no mention of the possibility of pardons,” the Blue House official said.