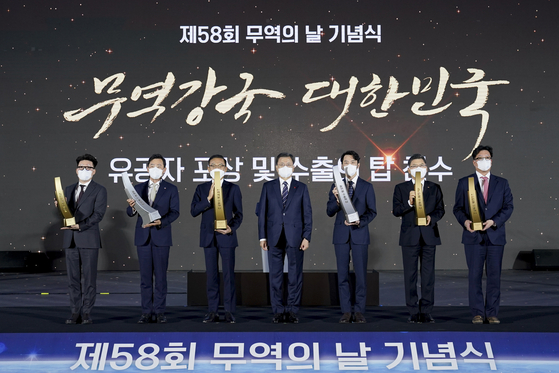 “This year will be go down in our history as the year of trade,” said Moon at the 58th Trade Day ceremony at Coex Convention and Exhibition Center in southern Seoul, pointing out that Korea is now the world’s eighth largest trading nation.

Korea's exports are forecast to exceed $630 billion and trade volume is expected to reach an all-time high of over $1.2 trillion this year, signaling a rapid economic recovery from the pandemic.

However, Moon noted concerns that “Covid-19 pandemic induced movement restrictions have intensified supply chain uncertainties” and that the European Union is introducing a carbon border adjustment mechanism, or a tariff on imported goods based on their carbon content, which could hurt some Korean industries.

“We have continued to make efforts to lower our trade barriers to reach out to the rest of the world,” said Moon. “Going forward we need to also overcome hurdles in achieving liberal trade.”

The Korean government, he added, “will continue to proactively counter trade protectionism and overcome trade barriers.”

In an attempt to become more resilient, Korea will also “provide comprehensive support for financing, marketing and consulting so that more small and mid-size enterprises (SMEs) can go global,” Moon said. This includes expanding its digital trade foundation to “create new opportunities for SMEs.”

Moon stressed that Korea will “respond to the intensifying global regulations and provide more support for companies to reduce carbon emissions.”

He continued, “The world is now moving towards achieving carbon neutrality. Only companies and goods with reduced carbon emissions will have competitiveness under the new trade order.”

Korea reported upgraded nationally determined contributions (NDC) targets, committing to reduce greenhouse gas emissions by at least 40 percent by 2030 from its peak in 2018 at the 26th UN Climate Change Conference, or COP26, in Glasgow last month. That is part of Korea’s goal to achieve carbon neutrality by 2050.

The government plans to expand support for research and development and tax incentives for the development of indigenous low-carbon technology, and Moon pledged to “stand by the private sector as they achieve carbon neutrality.

He noted that Korea is engaged in robust multilateral trade with free trade agreements (FTAs) with 57 countries that account for some 87 percent of the world’s GDP, and plans to work on deals with Middle Eastern and Latin American countries.

Trade Day falls on Dec. 5 and a ceremony is held annually by the Korea International Trade Association (KITA), giving awards to individuals and companies that have contributed to the promotion of Korean trade and expansion of exports.

The ceremony was attended by some 300 people, including Minister of Trade, Industry and Energy Moon Sung-wook and KITA Chairman Koo Ja-yeol.

Companies were given Towers of Export awards, including Samsung Electronics for exceeding an unprecedented $110 billion in exports in the past year, gaming company Krafton and production company Studio Dragon.

A total of 597 people received government and KITA awards this year, while 1,573 companies received Export Towers, including 1,453 small and medium-sized enterprises that contributed to the country’s export growth.