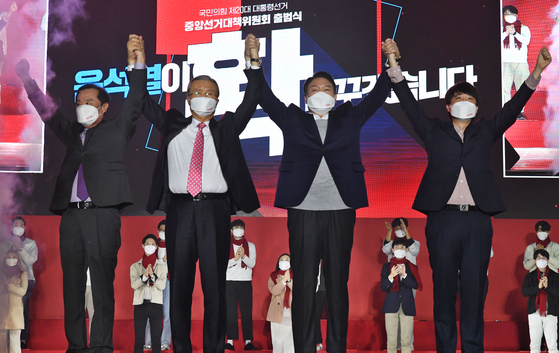 Yoon pledged to create a country with a "sound foundation, where fairness is common sense" as PPP leaders held a ceremony to kick off its campaign committee at the KSPO Dome in Songpa District, eastern Seoul, with some three months left till the March 9 presidential elections. He will be pitted against ruling Democratic Party's (DP) Lee Jae-myung, who Yoon is running neck-to-neck with in polls, and candidates of minor opposition parties.

Kim, the former interim leader of the PPP and a so-called political kingmaker, last Friday finally accepted an offer to helm Yoon's election campaign after a call from the presidential candidate, despite differences in views on how it should be run. Yoon and PPP Chairman Lee Jun-seok likewise reconciled in a dinner meeting in Ulsan Friday evening, apparently putting an end to their public feuding which culminated to the young party chief refusing to take part in public activities in the previous four days to express disgruntlement over campaign appointments and the communication issues.

This establishes a campaign with Kim Chong-in as the one-top leader a month after Yoon was selected as the PPP's presidential candidate. PPP chief Lee and Kim Byong-joon, Yoon's close aide, are standing co-chairs of the committee. Separately, Kim Han-gil, another close aide to Yoon, is head of the "new era preparatory committee."

In his speech, Yoon pinpointed the government and DP handling of the Covid-19 crisis and real estate policies as its biggest issues.

Yoon said he has a "heavy heart" over the lack of intensive care unit (I.C.U.) beds amid the spike in seriously ill Covid-19 patients.

He accused the DP of spending money that should have been used to increase I.C.U. beds on "getting more votes from people," criticizing the government's universal handouts for Covid-19 pandemic relief.

He stressed that the presidential election next year should be a stepping stone and "lay the groundwork" toward the local elections next June and general elections in 2024.

Yoon called the current administration "corrupt and incapable" and called to replace the "disgusting, hypocritical government."

However, Yoon, a former prosecutor general under the current administration, in his speech didn't directly mention the Moon Jae-in government, and rather referred only to the "Democratic Party government."

He also focused more on his visions, in a move away from his speech declaring his presidential candidacy in June which directly called out the Moon administration.

Yoon also stressed that the "most important thing is unity," mindful of the recent infighting within the party.

He called for people "to work together, even if 99 out of 100 things are different," for the sake of a change in government, appealing to a range of voters of differing viewpoints.

Yoon said that he plans to break away from past practices and run a campaign actually centered around the party's election campaign leadership.

He also pledged to "create an economy with fair competition conditions in which the private sector can freely show their creativity and imagination, thereby increasing the potential economic growth rate and creating many high-quality jobs."

He called for sustainable jobs, both in quality and quantity, and attaining strong welfare and social protection.

Yoon then called "for innovation" of his party in order to "completely change the Republic of Korea."

The ceremony featured a performance by dancers in their 20s, appealing to the crucial younger demographic. Yoon and party officials also sported red scarves symbolic of unity within the party. Yoon notably wrapped the scarf around Kim's neck and hugged him in a gesture of overcoming their past differences.

An artificial intelligence version of Yoon introduced the candidate before his speech, copying his voice and appearance.

Kim Chong-in in his speech said that Korea "can no longer be entrusted to an administration that has no ability, responsibility or shame" and stressed that Yoon will be able to achieve a change in government.

He added, "The trust I have in candidate Yoon will not differ from the people's trust in him."