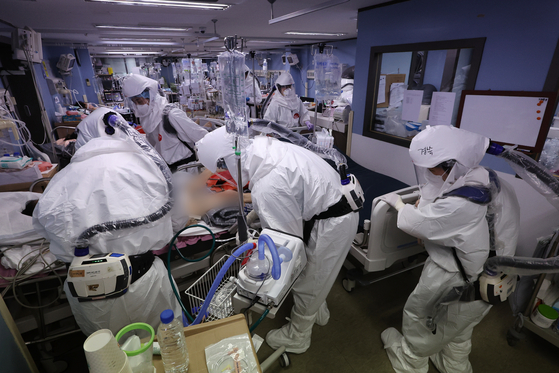 Medical staff treat patients in an intensive care unit at a hospital in Pyeongtaek, Gyeonggi, on Monday. With the recent spike in cases, 80.4 percent, or 994 I.C.U. beds were in use out of 1,237 total throughout the country as of Sunday. [YONHAP]

A quarter of all Covid-19 deaths in Korea took place since Korea relaxed its social distancing measures at the start of last month.

A total of 41 people died from Saturday to Sunday, bringing the total death toll to 3,893, according to the Korea Disease Control and Prevention Agency (KDCA).

Of them, 1,035, or 26 percent, died since the country started relaxing social distancing measures Nov. 1 as part of its “With Corona” scheme, Korea’s version of “With Covid” measures elsewhere.

The relaxations were rolled back a bit Monday due to a spike in cases and the threat of the new Omicron variant.

Included in the new cases were Omicron cases.

Korea added 12 more Omicron cases as of midnight Sunday, of whom 10 were local and two imported, bringing its total Omicron caseload to 24.

Korea first reported Omicron cases on Dec. 1, when five people tested positive. Cases are growing as three of the confirmed patients were found to have participated in a church program in Michuhol District in Incheon on Nov. 28, attended by almost 780 people.

Health authorities were tracking down around 1,200 people who were suspected to have come into direct or indirect contact with the Omicron patients.

Korea added Nigeria to the list on Dec. 3, and suspended all direct flights from Addis Ababa, Ethiopia, to Korea for two weeks starting Dec. 4. The first Koreans who tested positive for Omicron flew in from Nigeria, with a stop-over in Ethiopia.

There have been some protests from these countries, including one from the South African President Cyril Ramaphosa who said last week that international travel bans on South Africa were unjustified and not based on scientific basis.

“It’s understandable that the Korean government must take precautionary measures, but canceling all direct flights from Ethiopia to Korea has been very rough on the airline,” said Miretab Teklaye, a country manager of Ethiopian Airlines, based in Seoul. “We hope the government will consider other options.”

Ethiopian Airlines runs the only direct flights from Addis Ababa to Incheon.

Passengers who need to fly from Addis Ababa to Incheon need to take a trip to Dubai or Bangkok.

Omicron cases have been found in more than 30 countries including Britain, Portugal, the Netherlands, Germany, Australia, Japan, the United States, Canada and Brazil, in addition to Zimbabwe, South Africa, Ghana and Botswana.

Korea decided to put a halt into its gradual return to normalcy and implement stricter social distancing measures following a surge in new Covid-19 cases and the emergence of the more transmissible Omicron variant.