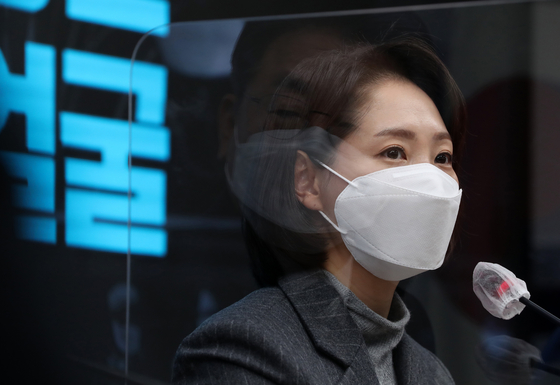 Cho Dong-yeon, former co-chair of the election campaign committee of the Democratic Party, resigned over controversy related to her privacy. [LIM HYUN-DONG]

Public figures recognized by courts are public officials, politicians, athletes and celebrities who voluntarily participate or intervene in certain public debates. Voluntary nature was presented as a standard for the definition.

Controversy over the recent resignation of Cho Dong-yeon as co-chair of the election campaign committee of the DP over her extramarital child is heated. Based on the court judgment, the resigned chairwoman may be classified as a public figure, as she voluntarily participated in public debates, including holding a press conference.

If so, was it right for the media to report on her privacy? Former Professor Chin Jung-kwon claimed that while the social benefit from restricting people with privacy issues from taking public positions is unclear, the damage is rather obvious.

The media has a lot to reflect on. After a YouTube channel raised the issue related to Cho’s private life, the news spread quickly. Without objective verification, many media outlets simply reported it by quoting the YouTuber. Mainstream media played the role of amplifying the influence of the YouTube channel. Prof. Lee said, “As the pattern of media consumption changes, the need to discuss publicity grows.” And yet, the media can hardly keep its hands off the case as it is directly related to the presidential election. Though Cho has left the political scene, she left behind rather heavy questions about public figures in Korean society.

Kwak Dong-yeon learns to love acting and steals the spotlight