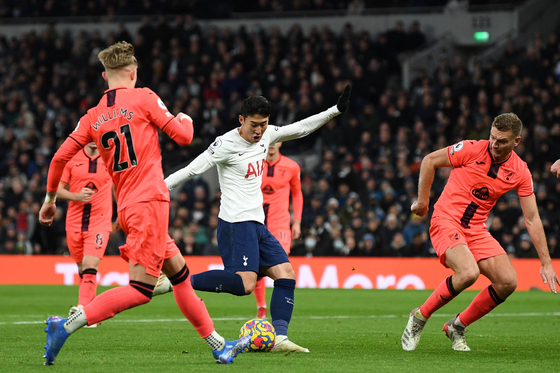 
Son Heung-min picked up his second goal in as many games on Sunday, hammering home an impressive piece of precision work to cap off Tottenham Hotspur's 3-0 win over Norwich.

Son's 77th-minute effort on Sunday came from inside the box, where he beat one defender and then slotted the ball through the narrow gap between two more defenders and the goalkeeper to take the score to 3-0. Lucas Moura earlier scored Tottenham's first goal, in the 10th minute, followed by Davinson Sanchez in the 67th minute.

Sunday's goal was Son's second of the week, following a 65th-minute goal on Thursday against Brentford. For that goal, Harry Kane playing Sergio Reguilón down the left side on a fast counter attack, Reguilón found Son in the box, and the Korean forward took one touch to beat the goalkeeper and give Tottenham a comfortable 2-0 lead.

Son was involved in both goals in that match — in the 12th minute, Son shot down the wing, firing in a cross that got picked up by Brentford defender Pontus Jansson ended up rebounding off Brentford midfielder Sergi Canos for an own goal.

Son's recent performance is reflective of a shift in the team as a whole. Since Antonio Conte took the helm as manager on Nov. 2, Spurs haven't dropped a single Premier League game. After drawing with Everton on Nov. 7, Spurs beat Leeds 2-1 on Nov. 21, Brentford 2-0 on Thursday and Norwich 3-0 on Sunday.

Tottenham have only dropped one game in that spell, losing 2-1 to Slovenian team Mura in the Europa Conference League on Nov. 25.

Spurs fans were quick to celebrate Conte at home on Sunday, although the Portuguese manager admitted he still has a lot of work to do.

"I want to say thanks to all the fans that sang my name," Conte said after the game. "On one hand I'm very happy for this, on the other hand I feel a lot of responsibility to our fans.

"They trust a lot in my work and to listen to my name was good because I have just arrived, only one month I've been here. Maybe it's too early. But I want to show in the future I deserve this. I think the good result helps you but I want to deserve the fans — if they decide to sing my name — for my work, for my total involvement in this club, in this situation."