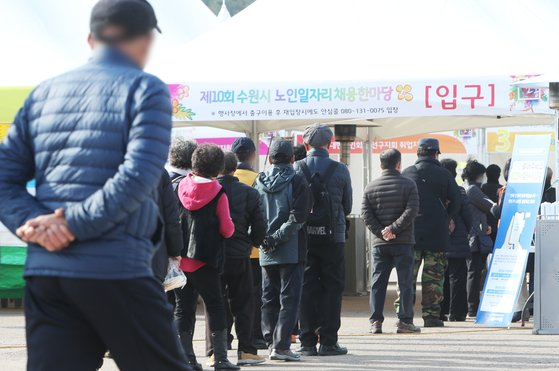 Older people line up at a job fair in Suwon last month. [YONHAP]


Jobs for people over the age of 59 increased by 380,000 last year, half the total jobs created during the year.

The number of jobs is different from the number of employed people, according to the statistics agency, as one person can have multiple jobs.

Korea's society is aging, but even so, analysts said it is still abnormal that jobs for old people exceed those open to young jobseekers.

"Increased hiring in the public sector means the government needs to spend more of the taxpayers' money," said Kang Sung-jin, a professor of economics at Korea University. "[The government] needs to create a sustainable environment for more jobs to be created from the private sector by invigorating the economy, but right now it is going in the opposite direction."

Last year, the greatest number of jobs was created in the healthcare and social welfare sectors, which is dominated by public sector jobs. Some 130,000 jobs were created in that sector, followed by 120,000 jobs in the public administration sector.