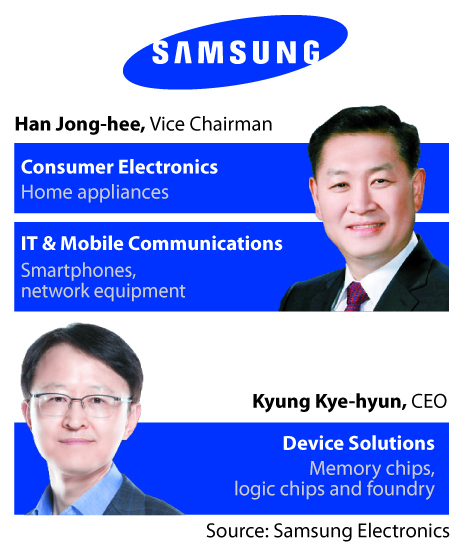 Samsung Electronics has shaken up management by replacing three CEOs and rejiggering the org chart so that two of the company's three divisions report to one newly appointed vice chairman and the other to a new CEO.

The appointments, effective Tuesday, come as the company, Korea's largest, faces intense challenges in its main business lines by price-cutting competitors like Xiaomi.

Han Jong-hee, who headed the company's television business unit under the Consumer Electronics (CE) division, has been promoted to vice chairman to head both the CE and IT & Mobile Communications (IM) divisions while maintaining his current role as the head of Visual Display. The CE division makes and sells home appliances while the IM division deals in smartphones and network equipment.

This is the first time for the tech company to appoint a single person to lead the two divisions.

The company says the decision to consolidate control came as a more comprehensive approach was needed since advanced technologies have been incorporated into a wide variety of electronic devices, including headsets, televisions and refrigerators.

Han is credited with cementing the company's position as the world's top television manufacturer.

Since Han took the helm at the television business, the company's share in the global TV market has been on the rise. Its global share in terms of sales grew from 28 percent in 2016 to 32.9 percent as of the first quarter, this year, according to market tracker Omdia.

In smartphones, Samsung Electronics is no longer an undisputed leader, as it is being squeezed by Apple in the high-end market and Chinese manufacturers in the budget range.

Sales at the IM division dipped below 100 trillion won ($84.8 billion) for the first time in ten years last year to 99.6 trillion won.

In semiconductor foundry, the market share gap with TSMC has not been reduced significantly, with the Taiwanese chipmaker claiming the majority of market. In dynamic random access memory (DRAM) sector, the share held by Samsung Electronics has been stagnant to lower in recent years.

Kim Ki-nam, who was vice chairman and CEO of the semiconductor-focused Device Solution division, was named chairman and has been moved to head the Samsung Advanced Institute of Technology, the company's research institute.

His replacement as CEO is Kyung Kye-hyun, whose previous title was CEO of Samsung Electro-Mechanics, which is 23.7 percent owned by Samsung Electronics. Prior to taking the top post at the company, Kyung worked as the head of design departments at Samsung Electronics, spearheading the architectural design of memory chips, such as DRAMs and NAND flash chips.