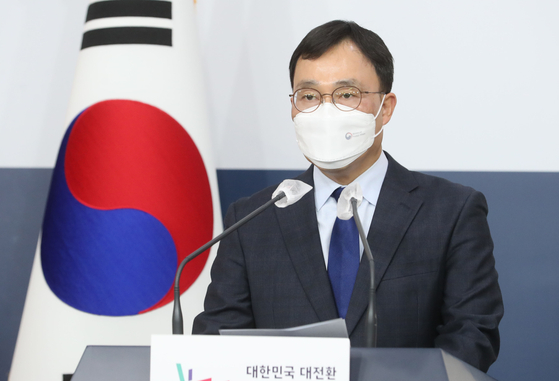 Foreign Ministry spokesperson Choi Young-sam in this file photo taken on Nov. 11 during a press breifing at the ministry headquarters in Seoul. [NEWS1]

Korea remained mum on Tuesday on whether it will take part in a growing diplomatic movement to boycott the Beijing Winter Olympics, after the White House announced its officials will skip the games in protest of Chinese human rights violations.

“Nothing has been decided yet on whether Korea will send a government delegation to the Olympics,” said Choi Young-sam, spokesperson of the Foreign Ministry, in a press briefing at the ministry headquarters in Seoul on Tuesday.

“[The U.S. government] let us know about their decision to boycott the Olympics through diplomatic channels before they made the announcement,” he said. “But they have not requested that we also take part in the boycott.”

Jen Psaki, White House spokesperson, announced in a regular press briefing in Washington, D.C. on Monday the Joe Biden administration’s diplomatic boycott of the Olympic games scheduled to take place in the Chinese capital from February to March next year.

“[The administration] will not send any diplomatic or official representation to the Beijing 2022 Winter Olympics and Paralympic Games given the [People's Republic of China’s] ongoing genocide and crimes against humanity in Xinjiang and other human rights abuses,” she said, while adding that American athletes will still compete.


When asked during the conference whether the U.S. government will be asking others to join in its diplomatic boycott, Psaki said, “obviously, we will leave it to them to make their own decisions.”

Talk of a diplomatic boycott of the Beijing Olympics has been floated in a number of countries including Australia, Britain, Canada and New Zealand.

Australian Prime Minister Scott Morrison in a press conference on Friday said his government “will be considering” joining an international boycott of the Beijing Olympics over Chinese human rights violations.

Canadian opposition leader Erin O'Toole was quoted by the Global News, a Canadian media outlet, to have said Monday, shortly after the White House announcement, that joining the boycott is "the best thing we can do alongside our allies to show pressure."

New Zealand’s Deputy Prime Minister Grant Robertson announced Tuesday that there will be no New Zealand government officials present at the Olympics, though he cited Covid-19 concerns as the main reason.

Japan, another close U.S. ally in the region, also remained mum on boycott possibilities on Tuesday. Prime Minister Fumio Kishida said during a press briefing the same day that Japan will make its own decisions in regards to the Beijing Olympics.

The Beijing Olympics used to be floated by the Moon Jae-in administration as a possible setting to open up dialogue with North Korea, and even to make progress on the declaration to end the 1950-53 Korean War, a top diplomacy objective of the Moon government as of late.

“I would like to reiterate that the Republic of Korea and the United States are currently closely discussing the issue of promoting an end-of-war declaration, and the discussions are making favorable headway for both,” said Foreign Ministry spokesperson Kim on Tuesday when asked about the possible influence of the American boycott on the Moon government’s end-of-war initiative.

Liu Pengyu, spokesperson of the Chinese Embassy in the United States, was one of the first Chinese officials to respond to the American decision to stage a boycott.

“Politicians calling for boycott #2022BeijingOlympics are doing so for their own political interests and posturing,” he wrote on his Twitter account on Tuesday. “In fact, no one would care about whether these people come or not, and it has no impact whatsoever on the #Beijing2022 to be successfully held.”

The words were nearly a copy-paste of Foreign Ministry spokesperson Zhao Lijian’s statement the day before during his regular press briefing.