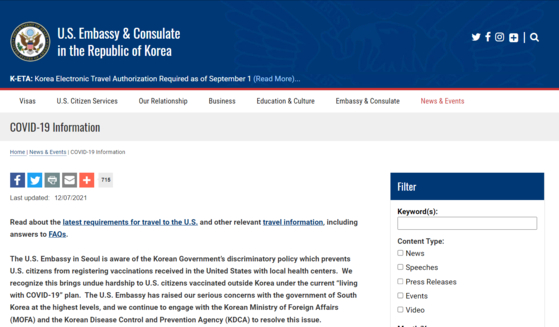 The U.S. Embassy in Seoul released a statement on its website on Tuesday to protest Korea's "discriminatory policy" against foreigners vaccinated abroad. [SCREEN CAPTURE]

Adjustments to a controversial policy on foreigners' vaccination status in Korea will be announced Thursday, said the Korea Disease Control and Prevention Agency (KDCA).

"The Korea Disease Control and Prevention Agency has been developing a document that can be used to certify a full vaccination status of those who have been vaccinated abroad but entered the border with no quarantine exemption," said the KDCA in a statement shared with the Korea JoongAng Daily on Tuesday. "After the development of the document is completed, the full vaccination status of foreign nationals will be registered with the health authorities [...] Details on this matter will be announced through the press briefing on Thursday."

Over 30 countries including the United States, Britain, Canada, India, Australia and New Zealand have called on Korea to stop discriminating against their citizens and to recognize their vaccine status so they can access public facilities like people vaccinated in Korea.

“The U.S. Embassy in Seoul is aware of the Korean Government’s discriminatory policy which prevents U.S. citizens from registering vaccinations received in the United States with local health centers,” said the embassy in a statement Tuesday. “We recognize this brings undue hardship to U.S. citizens vaccinated outside Korea under the current ‘living with Covid-19’ plan.”

A similar statement was released by the British Embassy in Seoul on Twitter on Tuesday, which said that a group of embassies "again asked the government of South Korea for urgent recognition of foreign nationals fully vaccinated overseas. They should have same access rights to public facilities as those Korean nationals fully vaccinated overseas."

The European Union Delegation in Seoul also called for swift recognition of the vaccination status of their citizens in Korea in a Twitter statement released at the same hour.

Health authorities do not recognize foreigners’ vaccination records if they were vaccinated outside of Korea unless they have a quarantine exemption issued by the Korean government. These exemptions are given a small number of foreigners entering Korea on business trips, humanitarian missions, or to meet immediate relatives.

The rule was created last July, leaving many foreigners who had gotten vaccinated abroad robbed of the only option to gain their vaccination registered.

As Korea relaxed its social distancing measures and introduced vaccine passes in the past four weeks, these foreigners have been barred from gyms, movie theaters, nightclubs, noraebang (singing rooms) and public bathhouses.

Starting this week they are practically barred from most public facilities, as the vaccine passes were expanded to include cafes, restaurants, libraries, clubs and bars and sports stadiums, and any other public events in which more than 100 people gather. 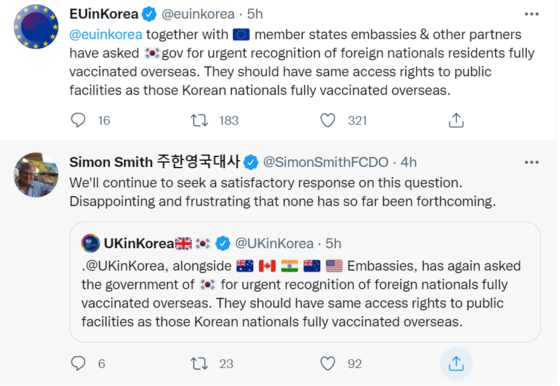 Screen capture of Twitter statements on Tuesday by the European Union Delegation in Seoul and the British Ambassador to Korea Simon Smith on Korea's health policy that largely does not recognize foreigners' overseas vaccination records. [SCREEN CAPTURE]

There were a little over 2 million foreigners registered as residents in Korea as of 2020. Of them, 1.6 million are staying in Korea on long-term visas, according to the Ministry of Justice.


“We’ll continue to seek a satisfactory response on this situation,” said British Ambassador to Korea Simon Smith on Twitter. “Disappointing and frustrating that none has so far been forthcoming.”