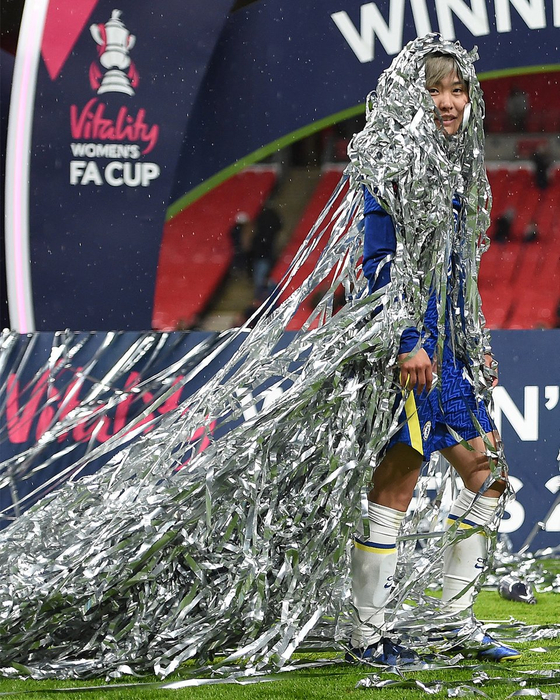 Fran Kirby opened the scoring for Chelsea in the third minute, with Sam Kerr scoring two more to cement the victory. Korean midfielder Ji So-yun was on the bench for most of the game, coming on as a substitute in the 86th minute to round off her eighth FA Cup in a Chelsea shirt on the pitch.

Ji joined Chelsea in 2014 and has quickly a crucial anchor at the center of the squad. Since Ji joined the squad, Chelsea have won five Super League titles, three FA Cups, two League Cups and the Community Shield. This year alone, Chelsea won the treble, with the league title, FA Cup and League Cup.

"Ji is a complete midfielder," ESPN said, "chipping in with goals and assists, but then doubling that up with an unrelenting engine in defense alongside her ability just to keep everything ticking along. The Korean international has been at Chelsea since 2014 and integral in their rise to one of Europe's top teams."

On the international level, Ji overtook Korean footballing legend Cha Bum-kun, better known as Tscha Bum, earlier this year to become the highest-scoring national team player of all time across all teams, all divisions, all genders and all competitions. Ji now has 61 goals and 125 caps to her name.

Chelsea have no time to sit back and celebrate their FA Cup win. With the 2021-22 Super League already well underway, Chelsea will be back in action with a game against Reading on Saturday. Before then, Chelsea have another tough fixture, taking on Juventus in the Champions League on Wednesday.