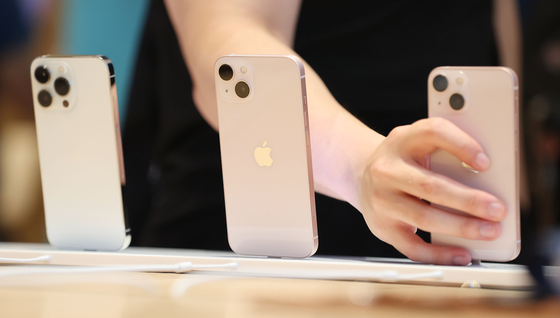 A visitor to the Apple Store in Sinsa-dong, southern Seoul, browses Apple's iPhone 13 series on Oct. 8, the day the manufacturer started selling the models in Korea. [YONHAP]


Apple confirmed that it is looking into a dropped call problem on some iPhone 13 models sold in Korea.

iPhone users in Korea and abroad raised the problem in October, which led into an upgrade of the operating system last month.
“Apple strive to provide the best experience for our customers and we are looking into the issue that is affecting a small number of users with LGU+,” an Apple spokesperson said on Wednesday, the company's first comment.


Still, saying that the problem was limited to LG U+ subscribers remains controversial, since that company has said that people in other countries and using other Korean cell phone services experienced dropped calls on their iPhones.


LG U+ subscribers accounted for 73 percent of users with dropped call problems, according to a survey conducted by an online forum of iPhone users in Korea. Customers of SK Telecom, the largest mobile carrier in the country, accounted for 16 percent and from KT, the second largest, 11 percent.

"Other mobile carriers in the United States and Japan are experiencing similar issues, so we think it's a problem with the phone itself," said a spokesperson for LG U+.


LG U+ is reporting the errors to the Cupertino, California-based Apple.


Since Dec. 3, the company has also started lending iPhone 12s to affected users while they investigate the cause of the error.

Apple declined to comment as to how it will deal with customers outside of Korea experiencing the problem.

The Ministry of Science and ICT and Korea Communications Commission (KCC) will likely launch a joint investigation, according to a source at KCC.

“The first step is to identify the cause of the problem,” the source said, “Since KCC has a limited ability to verify the technical aspects of the problem, we will cooperate with other related government agencies to minimize the impact the issue has on consumers.”

Apple released an iOS 15.1.1 update to fix the issue on Nov. 17. In the update note, the company wrote that the new version of the iOS “improves call drop performance on iPhone 12 and iPhone 13 models.”

Despite the upgrade, some customers report they are still experiencing problems.