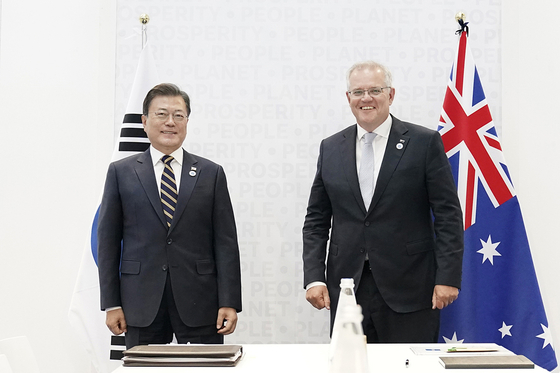 Korean President Moon Jae-in, left, poses for a photo with Australian Prime Minister Scott Morrison at a bilateral summit on the sidelines of the G20 summit in Rome on Oct. 31. [BLUE HOUSE]

Moon will hold a summit with Australian Prime Minister Scott Morrison in Canberra on Monday, said Park Kyung-mee, the presidential spokesperson, in a briefing Tuesday. The two leaders will hold a joint press conference afterwards.

This marks the first state visit by a Korean president to Australia in 12 years. Moon is the first foreign leader invited to Australia by Morrison since the outbreak of the Covid-19 pandemic and the country's strict lockdown. He will be accompanied by first lady Kim Jung-sook.

Also on Monday, Moon will visit a memorial for the 1950-53 Korean War to lay flowers and later hold a dinner meeting with Australian veterans. Australia sent around 17,000 troops to fight alongside South Korea during the Korean War.

Moon will visit Sydney Tuesday and meet with Anthony Albanese, leader of the opposition Australian Labor Party. He will also hold a meeting with Australian business leaders on cooperation to build a stable supply chain for key raw materials. Prime Minister Morrison and the first lady will host a dinner that evening.

The visit is expected to strengthen cooperation in the fields of carbon neutrality, hydrogen economy, defense, space and cyber technology, said Park.

"As seen in the recent urea crisis, it is important to diversify supply lines for key items," said a Blue House official.

Australia is also expected to reaffirm its support for South Korea's efforts to bring peace to the Korean Peninsula, Park said.

A Blue House official said that the Korean delegation has been reduced in size mindful of the Covid-19 pandemic and concerns over the new Omicron variant, while the Australian side also has conveyed it will do its best to ensure the safety of the visitors.

Moon and Morrison last held talks on the sidelines of the G7 summit in Cornwall, Britain, on June 12 and agreed to work towards elevating their countries' bilateral relationship to a comprehensive strategic partnership. During this meeting, Moon said the two countries should contribute to stabilizing the global supply chain and strengthen their low-carbon technology and hydrogen-related cooperation.

The two leaders were again reunited and held a bilateral summit on the sidelines of the G20 summit in Rome on Oct. 30. They agreed in a statement to build a technology partnership for lower emissions, committing to strengthen cooperation in areas including clean hydrogen and clean ammonia supply, low emissions iron ore and steel, hydrogen fuel cell electric vehicles, hydrogen power generation, carbon capture, utilization and storage (CCUS) and the critical minerals supply chain.

"The supply chain meeting in Sydney is a part of economic diplomacy to nurture future key industries, such as rechargeable batteries for electric vehicles, and encourage business cooperation and mutual investment between the two countries to secure a stable supply of minerals essential for transition to a low-carbon economy," said a high-level Blue House official Wednesday.

This year, Korea and Australia mark their 60th anniversary of establishing diplomatic relations. There are about 158,000 Koreans living in Australia.

Morrison said in a statement on Moon's visit Tuesday, "Our bilateral relationship continues to grow, underpinned by trade, shared values, common regional strategic interests and a commitment to an open, inclusive and prosperous Indo-Pacific region," describing Korea as "one of our closest partners in the region."

Korea and Australia will formally elevate their bilateral relationship to a comprehensive strategic partnership during the visit, Morrison said, "reflecting the depth and breadth of our cooperation and people-to-people links, and common aspirations to work even more closely together in our region."