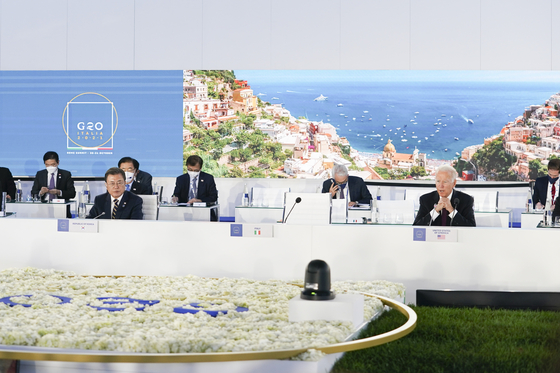 President Moon Jae-in will take part in U.S. President Joe Biden’s Summit for Democracy Thursday, said the Blue House Wednesday, which is aimed at bringing allies and partners together against authoritarian forces.

Korea was among 110 countries on a list made public by the U.S. State Department, which excludes China and Russia.

Moon is expected to give a briefing on Korea's achievements in promoting democracy and human rights late Thursday local time.

The two-day virtual summit will come days after Washington announced a diplomatic boycott of the Beijing Winter Olympics in February over human rights in China, putting strain on Sino-U.S. relations.

The Summit for Democracy, one of Biden’s election campaign pledges, is expected to tackle the key themes of defending against authoritarianism; addressing and fighting corruption; and advancing respect for human rights, according to the State Department.

Moon will speak during the first session and “plans to share our democratic achievements in the three areas of the agenda and reveal our intention to contribute to the promotion of democracy in the international community,” said a senior Blue House official.

U.S. allies like Japan and Australia are included in the democracy summit, but some analysts have questioned the inclusion of leaders of countries where democracy is considered under threat, such as Rodrigo Duterte, president of the Philippines.

Taiwan was also invited to the summit, as was Ukraine. Biden warned Russian President Vladimir Putin of Russia of strong economic measures from U.S. and European allies if military tensions with Ukraine escalated in a videoconference summit Tuesday.

The Beijing Olympics boycott could prove another challenge to Seoul as it tries to maintain a balanced position in the U.S.-China rivalry.

Washington has been reviewing an Olympic boycott for months but the announcement came just three weeks after the first bilateral summit between Biden and Chinese President Xi Jinping. The White House called out China for “ongoing genocide and crimes against humanity in Xinjiang and other human rights abuses.”

While American athletes will be allowed to compete in the Winter Games, U.S. officials, including Biden, will not be attending.

The announcement comes ahead of Moon’s state visit to Australia next week.

China’s Foreign Ministry said the country will respond to the U.S. boycott “with firm countermeasures” Tuesday.

Zhao Lijian, a Chinese Foreign Ministry spokesman, said in a briefing, “The U.S. should stop politicizing sports,” warning that it could “affect bilateral dialogue and cooperation in important areas and international and regional issues.”

When asked to elaborate on what measures Beijing may take, he only replied, “The U.S. will pay a price for its erroneous actions,” adding “wait and see.”

Zhao also questioned whether the United States is a good role model and asked, “Is the U.S., a country that disregards democracy, qualified to hold a summit on democracy?”

Korea has been hesitant to join in U.S.-led initiatives and coalitions that seem to alienate China, such as the Quadrilateral Security Dialogue, or Quad, which brings together Australia, India and Japan.

A key Blue House official told reporters Wednesday, "Our government is not considering a diplomatic boycott of the Beijing Olympics.”

The official said Washington informed Seoul of the boycott before its announcement, adding, “The United States holds the position that it is up to each country to decide on a diplomatic boycott.”

Korea and the United States launched their Democracy and Governance Consultations, a mechanism for coordination on human rights and democracy promotion efforts, in October as agreed on by Moon and Biden in their bilateral summit in May.

Seoul faces the dilemma of need backing from both Washington and Beijing in order to make any progress on the North Korea nuclear issue.

The Olympic boycott puts a damper on the Moon administration’s vision of pursuing a declaration to formally end the 1950-53 Korean War and bring North Korea to the dialogue table. The Beijing Winter Games have been considered an ideal venue for the key players of the armistice agreement that ended the war to come together.