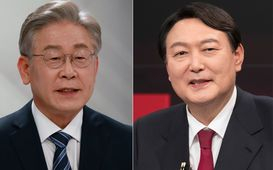 
Prosecutors on Tuesday decided to not pursue an investigation into main opposition People Power Party (PPP) candidate Yoon Suk-yeol, diminishing the likelihood that either presidential nominee will have their prospects affected by a prosecutorial probe.

The Seoul Central Prosecutors’ Office said that they decided to drop a probe into allegations that Yoon and his wife, Kim Keon-hee, violated the Improper Solicitation and Graft Act when Kim’s company garnered a great number of sponsors for an exhibition held at the Seoul Arts Center in December 2016 after Yoon was named prosecutor general.

Prosecutors looking into the allegations decided that there were no charges to pursue against the couple because Yoon was still the chief of the Daegu District Prosecutors’ Office at the time of the exhibition, and the anti-graft law does not address actions by a public official’s spouse.

The graft allegation against Yoon and Kim is the latest case in which allegations raised against the former prosecutor general have fallen flat.

Yoon was also accused in early September of ordering Son Jun-sung, chief of investigative information policy at the Supreme Prosecutors' Office at the time of the April 2020 general election, to prepare criminal complaints against several journalists and political figures affiliated with the Democratic Party (DP) to give to Kim Woong, a former prosecutor who was running for a seat in the National Assembly for the United Future Party (UFP).

The UFP is the precursor of the main opposition People Power Party (PPP).

Kim, currently a first-term lawmaker with the PPP, allegedly relayed the documents to his party's legal officials, though the UFP did not lodge the complaints.

However, all three warrant requests filed against Son have been rejected in court, and investigators in the team assigned to the case have dwindled in number following reassignments.

Just as the probability of Yoon being probed for the allegations has diminished, so have the chances of DP candidate Lee Jae-myung being investigated for his close acquaintances’ involvement in the Daejang-dong development corruption scandal.

Although Yoo Dong-gyu, a former aide to Lee, and Kim Man-bae, a former journalist who interviewed Lee in 2014, have both been arrested on charges of breach of trust and bribery in the Daejang-dong scandal, Lee himself is unlikely to face charges after prosecutors’ investigation hit a wall when the Seoul Central District Court declined to grant prosecutors an arrest warrant for former PPP lawmaker Kwak Sang-do.

Kwak’s 31-year-old son received a severance payment of 5 billion won ($4.2 million) in March after seven years’ employment as a mid-level employee at Hwacheon Daeyu, a small asset management company owned by former journalist Kim that raked in a profit of 57.7 billion won ($48.3 million) since 2019 on an investment of 49.95 million won, or a 1 percent stake in the mixed public-private development consortium that developed the Daejang-dong area in Seongnam, Gyeonggi.

Kim is accused of committing bribery by paying Yoo, who was the Seongnam Development Corporation’s acting president, 500 million won out of a promised sum of 70 billion won in return for favorable treatment for his company and its affiliates in the development’s profit distribution.

The Daejang-dong development was supported by Lee, who was Seongnam’s mayor at the time the project launched in 2015.