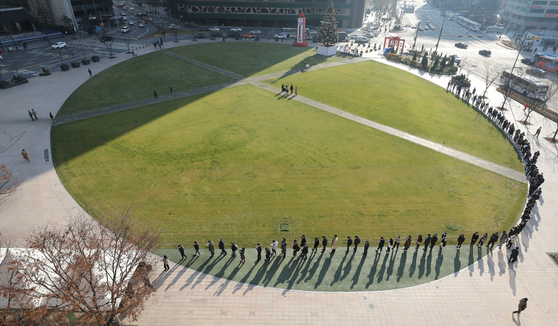 People wait in line to receive tests at a Covid-19 testing station in front of Seoul City Hall in central Seoul on Wednesday. [NEWS1]


New Covid-19 infections soared past 7,000 for the first time Wednesday, signaling that the pandemic's fourth wave is only getting worse, with the number of critically ill patients also reaching a record high.

According to the Korea Disease Control and Prevention Agency (KDCA), the country reported 7,175 fresh Covid-19 cases on Wednesday, a huge jump from 4,954 the day before. All but 33 were locally transmitted, bringing the total caseload to 489,484. The previous record was 5,352 set on Dec. 4.

Coronavirus figures tend to peak on Wednesdays or Thursdays as testing centers conduct more tests after the weekend.

Health authorities believe the current wave of the pandemic isn’t “stagnant or reduced," but is "continuing to grow,” leading to the significant increase of Wednesday’s cases.

Korea added two more Omicron cases on Wednesday, with the total variant caseload coming to 38 since the reporting of the first cases on Dec. 1. However, officials dismissed the possibility of the new Omicron variant being the reason for Wednesday's spike, saying the country is in the “early stages of the Omicron influx.”

Of local infections, the capital city of Seoul had 2,890 patients, followed by 2,263 in Gyeonggi and 431 in Incheon, which together are considered the greater Seoul area. Those cases accounted for 78.2 percent of total infections.

With cases rising, the country temporarily halted its living with Covid-19 strategies after slightly more than a month on Monday and ordered stricter public health measures, including limited social gatherings and expansion of places requiring vaccine passes, but still couldn’t stop a rapid spread of the virus.

“The effects of such strengthened antivirus measures and booster shot inoculations will likely [become manifest] in one to two weeks,” Son Young-rae, senior epidemiological strategist at the Central Disaster Management Headquarters, said in a briefing Wednesday.

The government reiterated that it would continue with in-person classes in schools.

“Many pointed out that it is important for schools to continue face-to-face classes on a daily basis,” Son said. “We also believe that’s very important in light of social values.”

The increase in critical cases led to a shortage of intensive care beds. As of 5 p.m. Tuesday, the country’s Covid-19 ICU bed occupancy rate reached 78.7 percent nationwide, while in the greater Seoul area it hit 84.5 percent. Daejeon, Sejong, Gangwon and North Gyeongsang had no Covid-19 ICU beds left.

The Health Ministry said 860 patients in greater Seoul are waiting to be allocated hospital beds, either in Covid wards or Covid ICUs, and among them, 358 people have been waiting for more than three days. 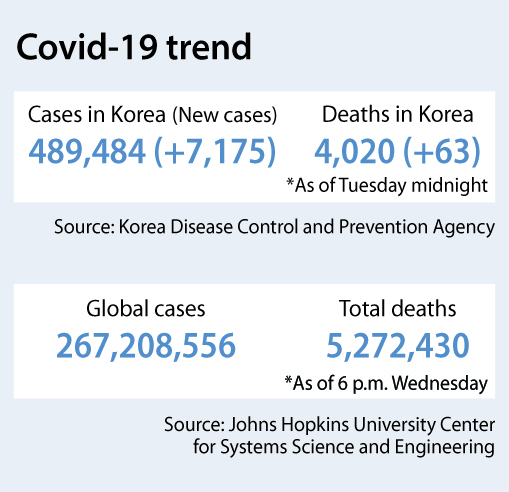 Amid the country struggle with a tight supply of hospital beds, at-home Covid-19 treatment has been expanded to basically all Covid-19 patients.

Home treatment had been used on a limited basis for virus patients aged under 70 who were asymptomatic or displayed only minor symptoms. But the government made home treatment a default this month, and called for the hospitalization of only those who are deemed to need it or who live in a virus-prone environment.

To reduce the burden on patient's family members who also had to go into isolation, the government announced Wednesday that the mandatory quarantine period for fully-vaccinated family members or those living with virus patients receiving Covid-19 treatment at home will be reduced to seven days from the previous 10.

“There are several studies showing that more than 90 percent of transmission occurs between two and three days after Covid symptoms occur,” Son said. “Transmissions decrease significantly after the fourth day. In fact, no additional transmitted cases have been found after the seventh day at residential treatment centers.”

The cohabitant must test negative on PCR tests on the sixth to seventh day of the quarantine to be released and go back to school or to work. They will be tested again on the 13th to 14th day.

While in quarantine, they will be allowed to go out for essential reasons, such as hospital treatment or buying medicine.

Unvaccinated cohabitants or those who haven’t completed their vaccinations, however, must undergo a total of 17 days of self-quarantine.

The government also expanded financial support for home treated-patients and their families depending on the number of members per household — but only for fully vaccinated people.

An at-home care virus patient in a four-member family, for instance, was paid 904,920 million won ($769) in relief grants, but the government said it will give an extra 460,000 won. Patients subject to the expanded compensation are limited to those who have completed inoculations, recovered from Covid-19, couldn’t be vaccinated due to medical reasons or minors under 19. Others will receive the original amount.

“Vaccines are the most important means of protecting not only oneself but also neighbors and other members of society,” Choi Jong-kyun, director of home treatment team at the headquarters, said in the briefing. “To that end, the previous relief grant was given to all hospitalized or at-home care patients regardless of their vaccination status, but the additional grant was decided in effort to support vaccinated people.”