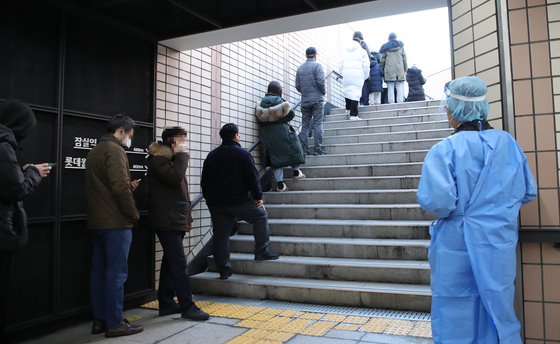 People stand in line to receive tests at a Covid-19 testing station in Songpa District, southern Seoul, on Wednesday. [YONHAP]


New Covid-19 infections soared past 7,000 for the first time Wednesday, signaling that the pandemic's fourth wave is only getting worse, with the number of critically ill patients also reaching a record high.

According to the Korea Disease Control and Prevention Agency (KDCA), the country reported 7,175 fresh Covid-19 cases on Wednesday, a huge jump from 4,954 the day before. All but 33 were locally transmitted, bringing the total caseload to 489,484. The previous record was 5,352 set on Dec. 4.

The capital city of Seoul had 2,890 patients, followed by 2,263 in Gyeonggi and 431 in Incheon, which together are considered the greater Seoul area. Those cases accounted for 78.2 percent of total infections.

The increase in critical cases led to a shortage of intensive care beds. As of 5 p.m. Tuesday, the country’s Covid-19 ICU bed occupancy rate reached 78.7 percent nationwide, while in the greater Seoul area it hit 84.5 percent. Daejeon, Sejong, Gangwon and North Gyeongsang had no Covid-19 ICU beds left.

The Health Ministry said 860 patients in greater Seoul are waiting to be allocated hospital beds, either in Covid wards or Covid ICUs, and among them, 358 people have been waiting for more than three days.

On Monday, the country temporarily halted its living with Covid-19 strategies after slightly more than a month and ordered stricter public health measures, including limited social gatherings and expansion of vaccine passes. The effects are likely to become manifest in one to two weeks.