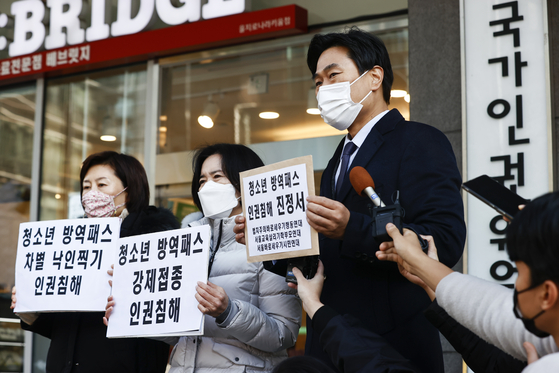 Members of civic groups protest the implementation of vaccine passes for teenagers, saying it is a violation of the students’ rights, during a press conference in front of the National Human Rights Commission of Korea's office in Jung District, central Seoul, after submitting their petition to the commission Wednesday. [YONHAP]


In protest of implementing the government's controversial vaccine pass policy for adolescents, civic groups filed a petition to the state human rights commission Wednesday, calling the policy discriminatory and infringing upon the teenagers’ freedom.

Three Seoul-based civic groups announced that they filed a petition against the Korea Disease Control and Prevention Agency (KDCA) and the Ministry of Education’s youth vaccine pass policy because it "violates the minors’ basic rights," during a press conference in front of the National Human Rights Commission of Korea's office in Jung District, central Seoul.

“The government is coercing our children into vaccinations by requiring vaccine passes to go places that they have to go to such as hagwon [cram school] and restaurants,” said Lee Hye-kyeong, president of the Seoul Education Love Parents’ Association. “It’s a clear power play by the state.”

The Central Disaster Management Headquarters announced Friday that from Feb. 1, 12- to 18-year-olds — people born between the years 2003 and 2009 — will also be required to present vaccine passes in order to enter facilities such as hagwon, libraries, PC bang (internet cafes), gyms, cafes and restaurants, unless they submit a negative PCR test that was conducted within the last 48 hours.

The National Human Rights Commission of Korea will investigate determine whether the government is violating the human rights of students through implementing the vaccine passes. If the case is considered to be in violation of their rights, the commission can advise the government to correct or newly implement laws, systems and policies to fix the violation and prevent the recurrence of human rights violations or discriminatory acts.

To answer the public’s questions about the controversial policy, Education Minister Yoo Eun-hae held a live Youtube Q. and A. session Wednesday along with two medical experts, at Yanghwa Middle School in Yeongdeungpo District, western Seoul.

The number of live viewers recorded 4,000 at its peak. Questions were taken both live and in advance.

To Ulsan student Ryu Jin-sun’s question about the safety of Covid vaccines, Choi Yeong-Jun, medical professor at Korea University, answered that “While vaccines have limitations, their benefits outweigh the costs.”

Shin Yoo-soon, a student from Busan, asked why facilities like libraries and hagwon were included in the vaccine pass system while others, like churches and department stores, were left out.

“We had to expand vaccine passes to facilities that are producing large amounts of infections, and right now that includes hagwon,” answered Jeong Jae-hun, medical professor at Gachon University.

Minister Yoo emphasized that a vaccine pass does not mean mandatory vaccination.

“Vaccine passes urge citizens to get vaccinated, but in the case that some cannot or will not get vaccinated, those people still have the option of submitting a negative PCR test that was conducted within the last 48 hours,” said the minister.

“We know that parents and students are worried about the side effects of the vaccine, but the best thing to do right now to protect ourselves is to get vaccinated.”