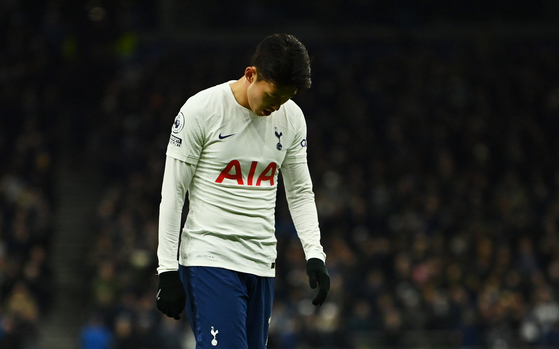 
Korean forward Son Heung-min is reportedly one of the six Tottenham Hotspur players to have tested positive for Covid-19 in a dressing room outbreak that could seriously disrupt the London club's season.

According to Football Insider quoting an anonymous source at Tottenham, Son, Lucas Moura, Ben Davies and Cristian Romero have all tested positive for Covid-19. Emerson Royal and Bryan Gil had already tested positive and sat out the club's Sunday game against Norwich City.

Football Insider also named coaches Ryan Mason, who had been the club's interim manager at the end of last season, and Cristian Stellini as additional positive cases.

Tottenham have not confirmed which players have tested positive.

Under British government guidelines, any player that tests positive will have to self isolate for 10 days. If they report symptoms, that period could be extended.

Currently, Thursday's Rennes game is scheduled to go ahead. Even with Tottenham's first team severely hit, the Europa Conference game is unlikely to be canceled as, under UEFA rules, the game has to go ahead as long as both teams have at least 13 available players. Even if the game is postponed, it would have to be played within this month.

According to The Guardian, Spurs, who are still finding their feet under new manager Antonio Conte, are already in talks with the Premier League about potentially postponing Sunday's Brighton game.

If Son is one of the players affected, the outbreak couldn't have come at a worse time for the Korean star, who has just started building offensive momentum over the last week.

Son picked up his second goal in as many games on Sunday, hammering home an impressive piece of precision work to cap off Spur's 3-0 win over Norwich.

Son's 77th-minute effort on Sunday came from inside the box, where he beat one defender and then slotted the ball through the narrow gap between two more defenders and the goalkeeper to take the score to 3-0. Lucas Moura earlier scored Tottenham's first goal, in the 10th minute, followed by Davinson Sanchez in the 67th minute.

Sunday's goal was Son's second of the week, following a 65th-minute goal on Thursday against Brentford. For that goal, Harry Kane playing Sergio Reguilón down the left side on a fast counter attack, Reguilón found Son in the box, and the Korean forward took one touch to beat the goalkeeper and give Tottenham a comfortable 2-0 lead.

If the reports are true, Son won't be the first Korean player in Europe to test positive for Covid-19.

Wolverhampton Wanderers forward Hwang Hee-chan, now the only other Korean in the Premier League, contracted the virus last year while on international duty with the Korean team. For Hwang, who played for RB Liepzig at the time, the infection derailed what was already a difficult season.