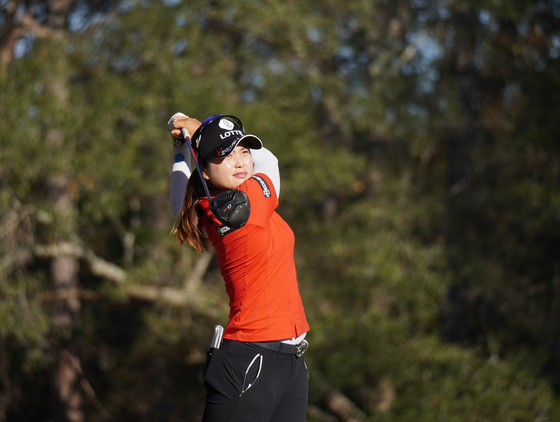 Choi Hye-jin watches her drive during the third round of the LPGA Q-Series Week One tournament at Magnolia Grove in Mobile, Alabama on Saturday. [LPGA]


The second week of the LPGA Q-Series qualifying tournament will tee off Thursday at Highland Oaks Golf Club in Dothan, Alabama, with Korean golfers Choi Hye-jin and An Na-rin among the clear front-runners to earn a 2022 Tour card.

The LPGA Q-Series tournament began last week in Magnolia Grove in Mobile, Alabama, where Choi finished in second place and An in third. The two maintain those positions going into the second round on Thursday.

"I've been satisfied with my performance this week, but I still made some mistakes here and there," Choi said after last week's tournament in Mobile. "I'll have about three days to work on my game, and I hope to play even better in the next phase."

For An, the LPGA Q-Series is only her second competitive appearance in the United States, the other being a tied-for-63rd finish at the 2020 U.S. Women's Open. An came close to making an impact on this year's Tour, however, finishing third at the 2021 BMW Ladies Championship, the only LPGA event in Korea.

An and Choi aren't the only Korean golfers to make the cut for the second leg of the qualifying event. Hong Yae-eun heads to Highland Oaks tied for 11th place, while Park Kum-kang tied for 52nd and Kim Min-g tied for 62nd, immediately below the cut.

One notable absence from the second round is former LPGA golfer Lee Mi-hyang, who, despite having two LPGA trophies to her name, fell just out contention last week. Alongside Lee, Hyo Joon-jang and Min Seo-kwak also missed the cut at Magnolia Grove.