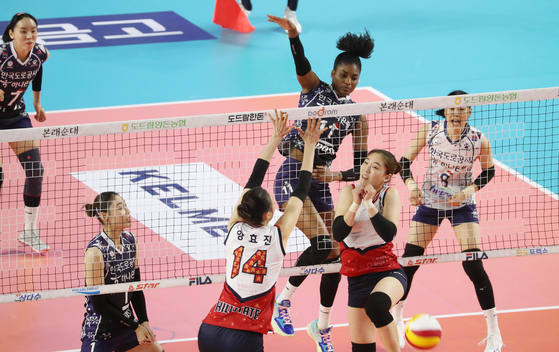 After Hi-pass took the first set relatively easily, 25-19, Hillstate leveled the game by winning the second set, but with a narrower score, 25-23. Competition really fired up in the third set, when Hillstate pulled ahead by five points, up 20-15. Hi-pass fought back, scoring five consecutive points to level the match at 20-20. The competition remained fierce until Jeong Ji-yun of Hillstate was able to score the last point and take a two-point lead. The third set finished 26-24.

But Hi-pass fought back hard, taking the fourth set 25-23 to once again level the match with two sets each. It was down to the fifth set for the win and it was Hi-pass that emerged victorious as Jeon Sae-yan scored the final point to end the set 15-11, making Hi-pass the first club to defeat Hillstate this season.

Before Tuesday, Hillstate were chasing the longest winning streak in the women's V League, 14 consecutive wins, a record set by the Seoul GS Caltex Kixx in the 2009-10 season.

Hillstate have dominated the league from the start of the season. Hillstate won five of their matches in complete 3-0 shutouts, six matches were won 3-1 and the only match won in five sets was on Nov. 5, when Hillstate faced a surprisingly difficult fight against the Pepper Savings Bank AI Peppers, the most recent addition to the women's V League.

Hi-pass will next face the Incheon Heungkuk Life Pink Spiders on Friday. Hillstate will face the Kixx on Saturday. As of press time, Hillstate are at the top of the standings. Kixx and Hi-pass are tied in the runner-up position with nine wins and four losses each.