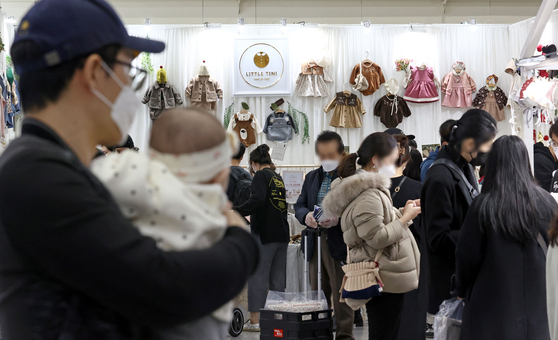 Visitors at COEX’s Baby Fair held in November in Seoul. The number of newborns have dropped with more young couple pushing back their marriage due to Covid-19 outbreak. The pandemic is considered to be the key factor that would speed up Korea’s population decline. [YONHAP]

The greying and shrinking of Korea has only been accelerated by the Covid-19 pandemic, as young couples postpone getting married and having children in a country with one of the lowest fertility rates in the OECD. Blocking of migrants also had an effect.

According to a study by Statistics Korea, the population is expected to shrink by 60,000 every year for the next decade.

The statistics agency projected that the overall population decline will start this year, which is eight years faster than its projection made in 2019.

Korea recorded its first natural population decline in 2020, with the number of people who died exceeding the number of newborns. A drop in net migration this year due to Covid-19 quarantine measure will result in the overall population shrinking slightly from a year earlier.

“The natural population decline, which started in 2020, has continued and due to Covid-19, net international migration shrunk and the speed at which marriages and births fell accelerated,” said Kim Soo-young, Statistics Korea director of demographic trends. “The number of newborns and the birth rate are expected to shrink further in the next three to four years.”

Last year the gap between people who died and newborns was 33,000, a trend that has continued this year.

The agency projected that the impact of Covid-19 on marriages will continue until 2025, and the total fertility rate will drop to 0.52 in 2025.

Kim said these demographic changes will have a major impact as the economically productive population shrinks and Korea ages faster than other nations.

Last year, its economically productive population — people between the ages of 15 and 64 — amounted to 37.4 million.

Korea currently has the highest ratio of economically productive population among the OECD countries at 72.1 percent of the total population. By 2070 that ratio will be 46.1 percent.

This could have a major impact on the nation’s growth and the costs of taking care of the elderly population.

By 2070, Korea is expected have the highest ratio of people 65 or older, who will account for 46.4 percent of the population.

“The results of the population estimate once again raise the awareness of the population cliff crisis that we face,” Finance Minister Hong Nam-ki said on Facebook Thursday. “However, we need to keep in mind that the study has been greatly affected by short-term factors such as the unprecedented Covid-19 crisis.”

Once the world returns to normal, more foreigners will come to Korea and there will be more marriages and births, he said.

Number of births in first quarter declines 4.3 percent on year