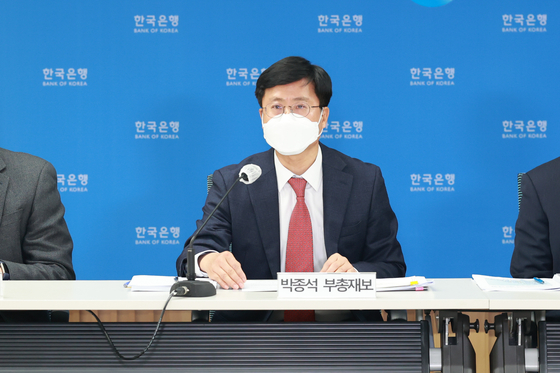 
The Bank of Korea (BOK) warned that inflation may last longer, hinting at additional interest rate hikes next year.

According to a report released by the BOK on Thursday, the central bank said it expected private consumption to recover, driven by increases in spending in the services sector. Under the Korean government’s “With Corona” policies gradually relaxing social distancing measures, spending on services is increasing.

“If social distancing measures continue to be eased, consumption is expected to increase for art exhibitions, sports events and travel,” the report said. “After the Covid-19 pandemic, households were also able to increase their savings.”

The central bank said there could be pent-up demand from people who saved up money during the pandemic, driving up private consumption in the fourth quarter through the first half of next year.

Another factor is inflation in other countries. With Korea’s economy highly dependent on exports, it is affected by prices in its major trade partners.

The world’s economies have been suffering from inflation spurred by bottlenecks in the global supply chain. While private consumption is growing, supply is not following, pushing up prices. Soaring commodity prices, especially crude oil, drove up production costs of companies as well.

The BOK said it projects these inflation risks will persist into the first half of next year.

If inflation continues to be a problem, the BOK can be forced into more rate hikes.

BOK Gov. Lee Ju-yeol already said during a press briefing on Nov. 25 that the current base rate, set at 1 percent, is still "accommodative" considering the recent growth in Korea’s economy and consumer prices. Then, the central bank upped this year’s inflation outlook by 0.2 percentage points to 2.3 percent.

“I don’t see why we should rule out the possibility of a rate hike in the first quarter of next year, though it would depend on the economic indices,” Lee said.

On Thursday, Park Jong-seok, deputy governor of the central bank repeated Lee’s earlier comments in an online briefing saying the rate in Korea “is still accommodative despite two rate hikes this year.”

The BOK said the Omicron coronavirus variant is a factor that could possibly pull down the economy.

“We acknowledge that Omicron can impact private consumption as well as prices, but at this point we do not know how much impact it will have,” Park said.