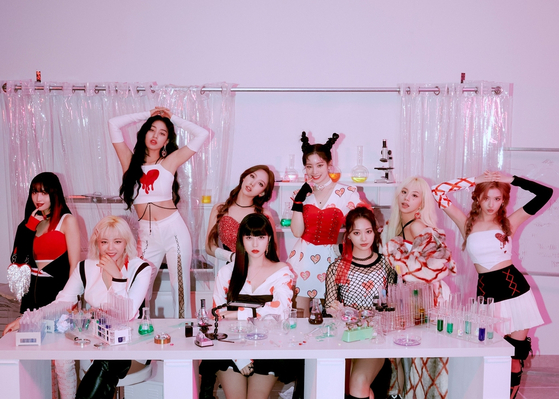 
Girl group Twice’s third album “(Formula of Love) : O+T=〈3” remained on the Billboard 200 album chart for the third consecutive week, according to its agency JYP Entertainment.

The album landed at No. 3 on the chart last month when it was released and most recently ranked at No. 26.

On Billboard’s Artist 100 chart, which takes into consideration rankings across the Hot 100, Billboard 200 and Social 50 charts, the group ranked No. 62.

Twice is set to release a ballad single titled “Doughnut” on Dec. 15 in Japan, and will kick off its fourth world tour at KSPO Dome in Songpa District, southern Seoul from Dec. 24 to 26. The group will then head to the United States in February and perform in five cities — Los Angeles, Oakland, Dallas, Atlanta and New York.

The group’s English single “The Feels” was also named as one of the 50 Best Songs of 2021 by American entertainment magazine Rolling Stone.