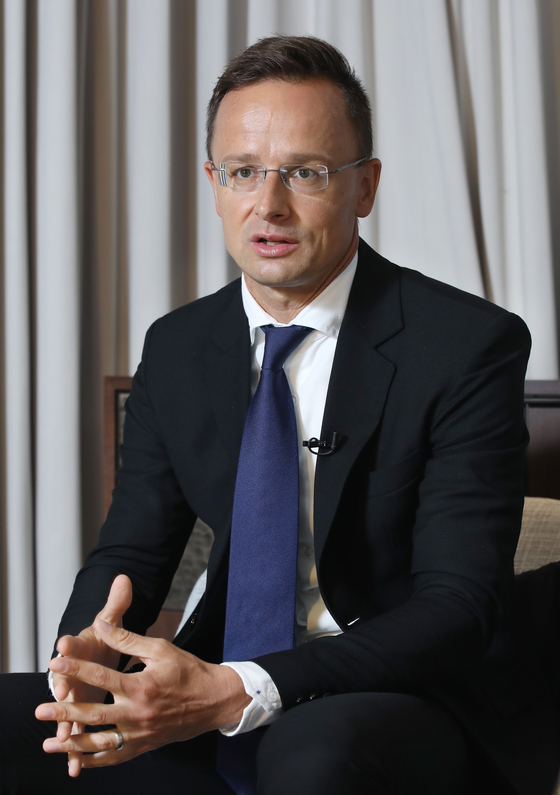 Hungarian Foreign Minister Peter Szijjarto speaks with the Korea JoongAng Daily in this file photo dated July 27, 2020. The minister spoke with the paper during his visit to Seoul on Wednesday, but the interview was held virtually due to the coronavirus. [PARK SANG-MOON]


It’s not about politics or ideology, but about pragmatism, said the Hungarian foreign minister when asked about the recent energy crisis in Europe and Hungary’s decisions on the energy front.

“You have two options in this regard. To be politically and ideologically motivated, then no one knows how you will ensure gas for your own country. Or you can be pragmatic and sign the cooperation agreement,” said Peter Szijjarto, speaking with the Korea JoongAng Daily during his visit to Seoul on Wednesday. “For us, cooperation with Russia is definitely beneficial.”

Hungary signed a natural gas agreement with Russia in September that will supply the Central European country with the energy for the next 15 years. It is also one of the European countries looking to rely more heavily on nuclear power, a controversial topic in Europe these days.

“Hungary has been using nuclear power for four decades now. We do consider it as a clean, safe, cheap and sustainable way of generating energy,” said the minister. “Now we have an agreement with Rosatom to build the second nuclear power plant in Hungary, with which the share of nuclear [power in total electricity generation] will increase to 70 percent.”

It is against this backdrop that the Central European country is now looking to Korea for a different type of energy support, which brought the minister to Seoul despite the worsening pandemic situation worldwide with the rise of the Omicron variant.

“Korea is the No. 1 provider in the world when it comes to EVs [electric vehicles] and batteries, and Korean companies in this field will play a decisive role when it comes to the future long-term development plan of our national economy,” said Szijjarto, who earlier in the day sealed a deal with a Korean company to mark the second-largest foreign investment in Hungary this year.

“Today I made an agreement with a company called Ecopro, [which] will build […] the first cathode factory in [Hungary and] Europe,” he said. “Cathodes are one of the four most critical [pieces of] equipment of electric batteries. The factory will produce enough for 1.35 million electric cars on an annual basis.”

The minister visited Seoul from Wednesday to Thursday to meet with the business delegations and executives of battery and biomaterials companies including Bumchun, Inzi Controls, Solus Advanced Materials and Ecopro.

Szijjarto became the youngest member of the Hungarian National Assembly in 2002. Now 42 years old, Szijjarto, who has served as Hungary’s top diplomat since 2014, is one of the longest serving foreign ministers in the European Union. He is the second youngest foreign minister to serve his country.

The Korea JoongAng Daily met with the minister virtually on Wednesday, after a member of his delegation tested positive upon arrival at Incheon Airport. The member was said to have been quarantined immediately, and the rest of the delegates tested negative in their PCR tests.

The following are edited excerpts of the interview during which the minister spoke of Hungary’s energy transformation plans and where Korea fits into that picture, as well as where the upgraded bilateral strategic partnership may be headed in the near future.


Your visit closely follows the presidential summit last month during which the two nations decided to upgrade their ties to a strategic partnership. What does this change of status signify?
Korea is a strategic partner of Hungary and it’s not just a document to be signed. Korea is the fifth largest investor in Hungary. During the last three years, Korean companies brought the second most investment to Hungary among the member states of the EU, and the most investments in Central Europe. The year 2019 was the first year ever in our history when it was not a western country but an eastern one from where the most investments have arrived, and that was the Republic of Korea. And the situation is being repeated this year.

Korea is the No. 1 provider in the world when it comes to EVs and batteries, and Korean companies in this field will play a decisive role when it comes to the future long-term development plan of our national economy, as electromobility plays an important role in upgrading our automotive industry, which has a 30 share percent of our industrial output.


What would you say was the most important outcome of your visit?


The biggest announcement in the green field investment in Hungary was made in February this year when SK Innovation announced its multi-billion-euro investment. Today I made an agreement with a company called Ecopro, which brings the second-largest investment to Hungary this year, at 725 million euros [$821.5 million]. They will build the first factory outside of Korea in Hungary. This is going to be the first cathode factory in Europe, and cathodes are one of the four most critical [pieces of] equipment of electric batteries. The factory will produce enough for 1.35 million electric cars on an annual basis.


Countries transitioning to a greener transportation infrastructure face the question of how to generate their electricity, as using heavily coal-powered electricity to run EVs would be counterproductive. Hungary has turned to nuclear power, which generates 50 percent of the country's electricity. What is Hungary’s nuclear energy road map and what role does Korea play in it?


Hungary has been using nuclear power for four decades now. We do consider it as a clean, safe, cheap and sustainable way of generating energy. There is a big debate around that in Europe. There is a group of member states including the Central Europeans and France who are in favor of nuclear energy, and there is a big group of member states who [see] nuclear energy in a negative manner. Hungary is pro-nuclear and we are preparing for the construction of our second nuclear power plant. In this regard, we work together with Russia because our first nuclear power plant has also been constructed by Rosatom. Now we have an agreement with Rosatom to build the second nuclear power plant in Hungary, with which the share of nuclear [power in total electricity generation] will increase to 70 percent. We will complete this investment by 2028 or 2029. We have green lights from the EU and the preparations on the ground have been launched.

With Korea, on this matter, we see opportunities for cooperation in the fields where there is higher added value, such as medical use or isotopes, or training on this sector.


Will Korea be taking part in building new nuclear plants in Hungary?


Europe was recently hit hard by an energy crisis. Where does Hungary stand in all that?


Next to nuclear energy, we use natural gas. The continent of Europe got into very serious trouble because of some short-sighted way of thinking. And in Hungary, we have made an agreement with Russia on the long-term gas supply which ensures a safe supply for the next 15 years. So, Hungary is not affected by the energy crisis in Europe, because we made our strategic decisions already before.


What does it mean for Hungary to make strategic decisions on the energy front, which is becoming increasingly politicized in Europe?
Hungary is located in Central Europe, and if you look at the history of the region, whenever there was a conflict between east and west, Central Europe has always lost. That is why, for us, it is a national security interest to have a reasonable dialogue between the east and west. That is why we welcomed the summit yesterday between President Biden and President Putin. And you should not leave out of consideration that Russia is a regional reality in Central Europe. When you are located in Central Europe as a mid-sized, land-locked country, with no natural resources, then Russia must be taken into consideration as a regional factor. Given the infrastructure in Central Europe, given the lack of exploitation of major new gas reserves, basically it is Russia who can provide enough gas.

You have two options in this regard. To be politically and ideologically motivated, then no one knows how you will ensure gas for your own country. Or you can be pragmatic and sign the cooperation agreement. For us, cooperation with Russia is definitely beneficial.


How does Hungary plan to dispose of the highly radioactive waste from its nuclear facility? Safe disposal of nuclear waste is something many countries with nuclear power plants, including Korea, struggle with.
We have an agreement with Russia on that. Some waste we can store in Hungary as well. The bigger ones, we have an agreement with Russia on how to manage it, including delivering back [to Russia] part of the waste.


What do you think was the most important outcome of the summit between President Moon Jae-in and Hungarian President Janos Ader?


The summit took place under very friendly circumstances. It was not only a meeting between Korea and Hungary but it was also a meeting between Korea V4 [Visegrad Group], a region developing very quickly in the EU. We provide the most competitive circumstances when it comes to investments. Together the sizes of our national economies would put us in the G20 if we were one economy and one country. We provide the backyard for the German industries, which is really the backbone of the European economy — the trade volume between Germany and V4 countries is twice as high as the trade between Germany and France. Korean companies can take advantage of that [by working with the V4].


Going forward, where do you predict the people-to-people ties will grow between the two nations?


There is currently a program underway to bring more Korean language teachers to Hungary, and from the second half of next year, Hungarian language exams will be made available in Seoul so that Korean employees preparing to work in Hungary can take these exams. We also have been talking with Korea University to open a school or a branch in Budapest, so we look forward to more of such engagements.