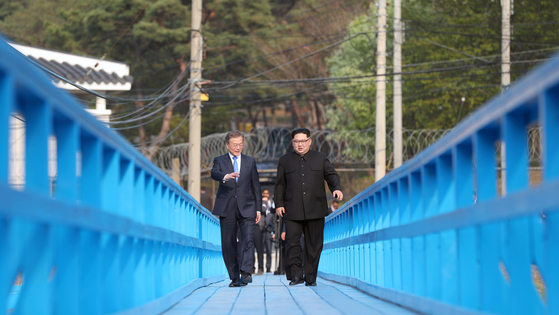 South Korean President Moon Jae-in, left, and North Korean leader Kim Jong-un stroll across a footbridge during their summit on April 27, 2018, at the inter-Korean truce village of Panmonjom. [YONHAP]

Seoul has been communicating directly with both Pyongyang and the United States on a declaration to end the 1950-53 Korean War, according to a Blue House official.

A high-ranking Blue House official told the JoongAng Ilbo Wednesday, "South Korea and the United States are in the final stage of coordination over the text for an end-of-war declaration, but it is not completed and still in progress."

The official added, "During the coordination process between South Korea and the United States over the declaration's text, we have continued to communicate with North Korea."

This was the first time the Blue House confirmed that a private communication channel with North Korea is being used.

The Blue House has not acknowledged that it has been operating a separate communication channel with the North other than the inter-Korean communication lines that were restored in July after Pyongyang severed them in June 9, 2020.

However, when it announced the restoration of the military, Panmunjom and joint liaison office hotlines, the Blue House revealed that President Moon Jae-in and North Korean leader Kim Jong-un had exchanged personal letters several times since April, suggesting the possibility of another communication channel.

The exact method of communication, however, was not described.

"The inter-Korean [communication] channel cannot be disclosed in detail," said a high-ranking government official. "However, discussions that require extreme security, such as an end-of-war declaration, cannot be conducted through the military communication line through which daily dialogue takes place."

The Blue House official said that "no personal letters were exchanged between the leaders [since the previously announced exchanges] and there is nothing currently being prepared," hinting at another high-level communication channel other than exchanges of letters.

The revelation may indicate that North Korea's position was directly or indirectly reflected in the process of discussing the draft text of an end-of-war declaration with the United States.

A senior Blue House official who met with reporters Wednesday said, "South Korea and the United States are leading the consultations on an end-of-war declaration, coordinating the text, timing, and participants."

The official added, "The key is how the North will respond." He said he expects a positive response because the two Koreas agreed to push for an end-of-war declaration in the Oct. 4, 2007 joint declaration between President Roh Moo-hyun and North Korean leader Kim Jong-il and in the April 27 Panmunjom Declaration in 2018 between Moon and Kim Jong-un.

The United States' diplomatic boycott of the Beijing Winter Olympics may put a damper on the Moon administration's vision of pursuing an end-of-war declaration and bringing North Korea to the dialogue table.

"There is no direct relationship between an end-of-war declaration and the Beijing Olympics," the same senior Blue House official told reporters. "The Korean government continues to hold the position that it hopes that the Beijing Olympics will serve as an opportunity to improve inter-Korean relations and advance the peace process on the Korean Peninsula... However, it is not being pursued with a specific time or occasion in mind."

Likewise, Unification Minister Lee In-young said during a meeting on Nov. 24, "Do not interpret the Olympics and an end-of-war declaration as being inseparable."