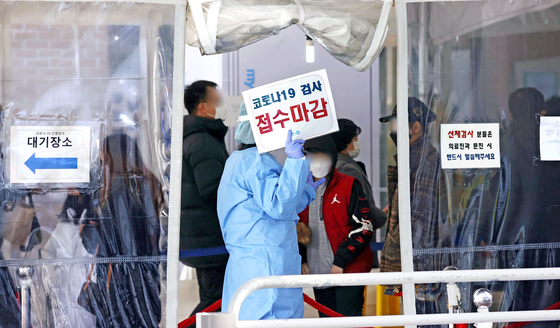 A staffer at a virus screening center in Mapo District, western Seoul, holds a sign saying applications for Covid-19 tests for the morning were closed on Thursday. [YONHAP]


Even with more than 80 percent of its people fully vaccinated, Korea's Covid-19 cases and hospitalizations continue to spike, driven by relaxed restrictions and waning immunity among the elderly.

On Thursday, the country reported its second-highest daily number of new infections, 7,102, of which all but 20 were locally transmitted, according to the Korea Disease Control and Prevention Agency (KDCA).

The number of Covid-19 patients in critical condition — referring to those who require oxygen treatment (such as high-flow oxygen therapy), mechanical ventilation (being put on a respirator), extracorporeal membrane oxygenation (ECMO) or continuous renal replacement therapy (CRRT) — hit another all-time high of 857, breaking the previous day’s record by 17 patients.

One in four virus fatalities in Korea have occurred since November 1, when the country switched its strategies to “living with Covid.”

Fifty-seven more people died of the virus, marking the 38th day since fatalities stayed in double-digits since Nov. 2, bringing the death toll to 4,077.

Korea is facing its worst time with the disease despite having more than 80 percent of its population fully vaccinated (80.8 percent as of Wednesday midnight) — leaving many people wondering why the situation only gets worse. 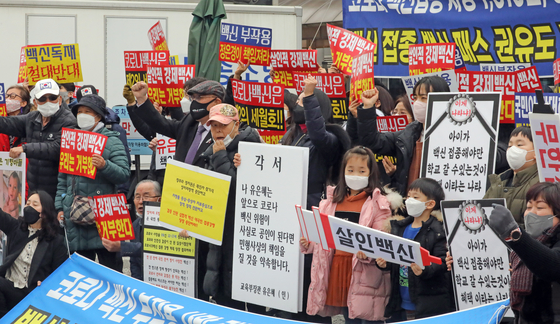 Protestors stage a rally at the government complex in Sejong on Thursday to demand the government withdraw its plan to expand the Covid-19 vaccine pass system to teenagers. [NEWS1]


Health experts point to the government’s wrong signals to the public through eased public health measures as well as reduced vaccine efficacy among the elderly as the main factors behind the surge.

“The ‘living with Covid’ plans should have been applied gradually but the restrictions were relaxed too much, making people think the pandemic was over,” Dr. Chun Eun-mi, a professor of respiratory medicine at Ewha Womans University Mokdong Hospital, told the Korea JoongAng Daily.

Jeong Eun-kyeong, commissioner of the KDCA, earlier mentioned a phased return to normalcy could start from Nov. 9 under the “Living with Covid” scheme during an audit of the National Assembly’s Health and Welfare Committee held on Oct. 7. The date was set for some two weeks after 70 percent of the population was expected to be fully vaccinated by the end of October. It takes two weeks for antibodies to develop after a jab.

“The country was teetering on the brink during the fourth wave of pandemic, and it was already seeing 2,000 daily new cases back then,” Chun said.

“The rate of progression into critical illness was increasing significantly, but the government still declared the ‘living with Covid’ scheme,” said Dr. Jung Ki-suck, a professor of pulmonology at Hallym University Sacred Heart Hospital and former director of the Korea Centers for Disease Control and Prevention (KCDC).

That rate, which had fallen to 1.5 percent in September, started climbing to 2 percent in October and rose to 2.5 percent in November. This means at least 175 out of the recent 7,000 new infected patients will be hospitalized in intensive care units, even with a shortage of hospital beds.

“The government knew the rate was increasing but ignored and implemented eased restrictions,” Jung said. “It’s like a bridge that was already weak but [the construction] was pushed ahead, making it collapse.”

Another big factor in the latest wave in infections is breakthrough infections, or infections of people who have been vaccinated. This is mostly being seen in people 60 or older due to weakened vaccine efficacy — because so many months have transpired since the jabs.

This seems to be particularly true of people who received AstraZeneca vaccines, which were the first vaccines given to people between the ages of 60 and 74.

According to the KDCA, people who completed their initial series of vaccinations accounted for 56.1 percent of new infections in the first week of November, which increased to 70.1 percent in the fourth week of that month.

“The government promotes its vaccination rate, but in that rate, the whole is compromised by the elderly who were inoculated too long ago,” Jung said.

“The country started giving vaccines at the end of February and continued until November, but in the meantime stopped and resumed and stopped and resumed again [due to shortages of vaccine supplies], so it took nine months to achieve the 70 percent-milestone. During that period, many people lost their immunity, but the government was too proud of the 70 percent number and overlooked that reality.”

Chun also said, “Israel initiated booster inoculations from July, and Korea should have started its own at least in August but I believe they didn’t pay enough attention as they were concentrated on vaccinating the general public at that time.

“Since the country started its ‘living with Covid’ strategies without giving booster shots in nursing homes and hospitals, it led to breakthrough infections and severe cases.” 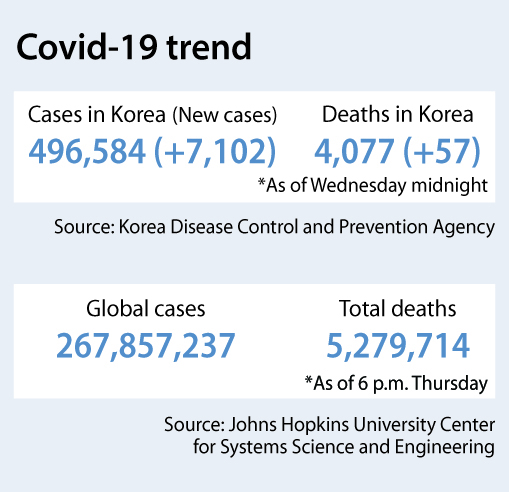 “As we have the Omicron variant, infections could grow out of control,” Chun said. “The government should implement stronger virus curbs now, which will show their effects in a month.”

“If the country doesn’t adopt measures close to a lockdown, we won't be able to stop the spread,” Jung said. “Most companies should start remote working, and all restaurants and bars should close except for take-out.”