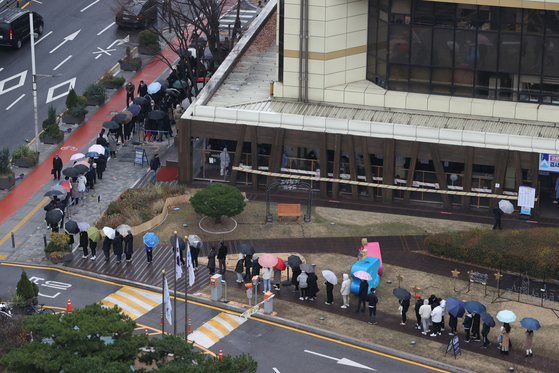 People wait in line to get tested for Covid-19 at a public health center in Songpa District, southern Seoul, on Friday. [YONHAP]


Korea reduced the interval between vaccination and booster shots to three months for adults on Friday.

“A swift inoculation of vaccines is the government’s top priority,” Prime Minister Kim Boo-kyum said during a virus response meeting on Friday.

“Based on the opinions of experts," Kim said, "the government decided to reduce the vaccine interval so that anyone aged 18 or older can get a third shot three months after their primary vaccination.”

Reservations can be made starting Monday on the website (ncvr.kdca.go.kr), while inoculations will start from Wednesday.

Despite the interval being cut to three months, the expiration date for vaccine passes will be kept at six months.

“In order to give sufficient time to get a third dose for double-vaccinated people […] we won’t shorten the validity from 180 days,” said Lee Ki-il, first control officer for the Central Disaster and Safety Countermeasure Headquarters, during Friday’s briefing.

Two-dose vaccinations (or one dose for the Janssen vaccine) are currently valid for six months after the final jab, while the government is discussing the validity period for booster shots.

“We are [gathering] experts’ opinions on the assumption that a third inoculation will have a much stronger vaccine effectiveness,” Park Hyang, head of the Central Disaster Management Headquarters of the Ministry of Health and Welfare, told a briefing.

The decision came as Korea grapples with the worst wave of pandemic yet. The country's daily new Covid-19 infections exceeding 7,000 for the third straight day Friday, and cases of the more transmissible Omicron variant cases now total 63.

The Korea Disease Control and Prevention Agency (KDCA) said the country reported 7,022 new Covid-19 cases on Friday, of which all but 39 were locally transmitted. The country’s total virus caseload surpassed 500,000, coming to 503,606.

Fifty-three more people died of the virus, bringing the death toll to 4,130.

With the spread showing no signs of letup, the government warned that “extraordinary measures” could be implemented next week including a limit on social gatherings and operating hours of businesses.

“If it is deemed difficult to reverse the crisis situation our community is facing, the government will have no choice but to decide on extraordinary public health measures, including intensive distancing rules,” the prime minister said.

Lee, however, added, “We will make our utmost efforts to try to quell the virus spread and not have a lockdown.”