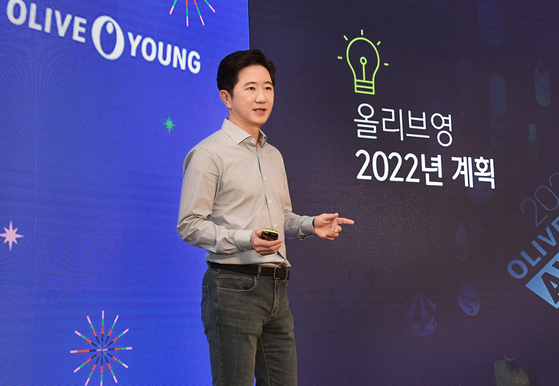 
Health and beauty store CJ Olive Young will continue its evolution into a so-called omni-channel business next year and strengthen its online business.

“With growth in online sales and recovery of offline sales, we have the stepping stones to grow as an omni-channel lifestyle platform,” said CEO Koo Chang-gun at a press conference Friday at the Dongdaemun Design Plaza (DDP) in central Seoul.

Omni-channel is a buzzword in retail, meaning that customers have a choice of "channels" to buy things, including in stores, online or on shopping apps.

CJ Olive Young will build more fulfillment centers next year, so its same-day delivery service can be faster. According to the company, it currently takes about an hour to three hours for purchased items to be delivered from the nearest olive young store.

It plans to hire more developers and digital personnel next year to improve the Olive Young app’s curation algorithm. The company mass-recruited developers in July, which it says was its biggest IT personnel recruitment since it started business in 1999.

Many of its goals relate to online sales, but the company is still dedicated to bricks-and-mortar stores.

"[Growth in offline stores] shows that Olive Young can continue to increase its market share and sales volume,” said Koo.

CJ Olive Young will remodel 250 of its 1,265 branches next year, more than the 99 remodeled this year. It will offer incentives for customers to visit its branches, such as offering perks to customers who buy on the Olive Young app but pick-up the items at stores.

The company said it is working with the Korea Trade-Investment Promotion Agency to build its business abroad.

The company is getting ready for an initial public offering (IPO) and has selected underwriters: Mirae Asset Securities, Morgan Stanley, KB Securities and Credit Suisse. Many specifics haven't been decided, Koo said, but the company plans to list sometime next year. 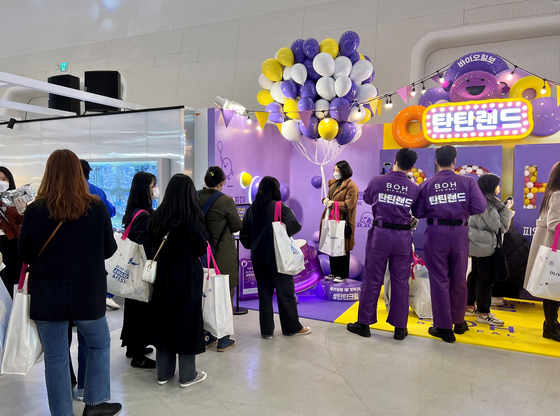 People line up to get gifts at cosmetics company Bioheal BOH's booth at the 2021 Olive Young Awards & Festa on Dec. 10. [LEE TAE-HEE]


Following the press conference, the beauty and health retailer kicked off its annual beauty convention 2021 Olive Young Awards & Festa at the DDP.

The event was held online last year due to the pandemic, but is being held normally this year. Tickets for the convention sold out in 26 seconds.

A total of 80 brands are participating in the event through Dec. 12 including Clio, Wakemake, Dr. Jart and Bioheal BOH.