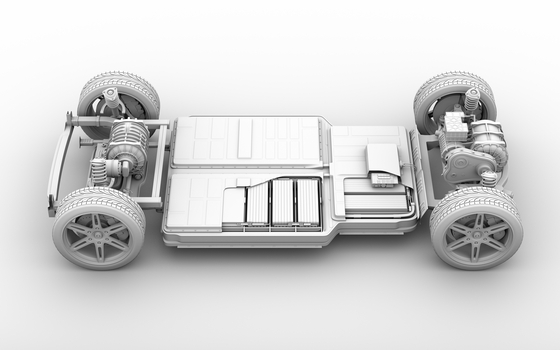 Used batteries from electric vehicles (EVs) are poised to become a business, not just a toxic waste problem.

The global used battery market is expected to reach 600 trillion won ($508 billion) by 2050 from 1.6 trillion won in 2019, according to Seoul-based market tracker SNE Research.

In Korea alone, some 80,000 batteries are expected to be discarded from EVs in 2029 compared to 440 in 2021, the Korea Energy Economics Institute says.

After being discarded from EVs, the batteries are getting second lives -- doing good for the environment as well.

Grasping the opportunity, the Korean government has lifted a number of regulations that hindered making money out of used batteries.

Previously, EV batteries were obliged to be surrendered to municipal governments. That obligation doesn't apply to EVs registered after 2020.

From next year, batteries that were surrendered to the municipal governments can be sold to private entities.

Companies in Korea are scrambling to find business opportunities in used batteries.

Giants Samsung, Hyundai, SK and LG are reported to have formed an alliance to come up with a comprehensive business plan to recycle and reuse EV batteries. 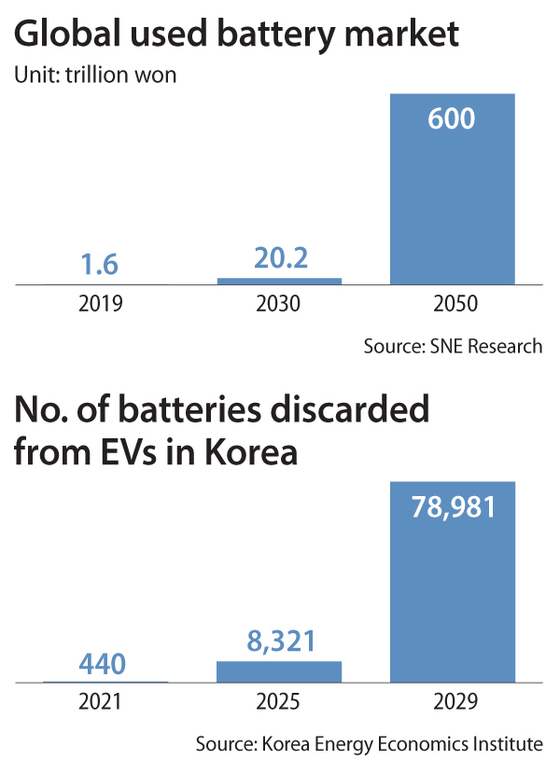 Battery makers are at the forefront of this new field.

SK On, a battery subsidiary of SK Innovation, recently initiated a pilot project to build energy storage systems (ESS) out of used batteries from EVs.

Owners of EVs normally need to replace their lithium-ion batteries five to 10 years after the purchase because the batteries lose driving range and take longer to charge.

That doesn’t mean the batteries are useless. They still have value for less-demanding purposes, such as being part of an ESS or used for smaller electric mobility devices such as electric bikes.

SK On’s energy system will be used on a construction site of an apartment complex in Anyang, Gyeonggi for the next two years.

The project is a major test of SK On’s battery recycling business and will collect data to develop the technology for two years, according to the company.

SK On is also collaborating with the Korea Testing Laboratory to establish industry standards to evaluate the remaining value of used batteries as well as their safety.

Since the industry is at an early stage, there are no standards for evaluate used batteries yet.

“Establishing standards for evaluating battery packs will invigorate the used battery market such as for ESSs or using them for small electric mobility,” the company said. "It will help Korea take an upper hand in the global used battery market as well."

LG Energy Solution has joined forces with a local EV taxi platform to collect used batteries and make them into an ESS. The ESS made in this project will be used as a rapid charger for EVs, although the progress of the project has remained confidential since its launch early this year.

The company is also running an ESS at its battery factory in Ochang, North Chungcheong to allow EVs on site to charge up.

Without standardized guidelines to evaluate used batteries, the ongoing projects will not be able to grow into real businesses.

"New batteries have consistent quality, but used batteries don't, which is why they need more careful and strict evaluation," said Park Chul-wan, an automotive engineering professor from Seojeong University.

"Using batteries that have different remaining lifespans can lead to deterioration of an ESS product as a whole or lead to safety issues. At the moment, there are no standardized guidelines to do all these but companies or institutions are doing them on their own."

From next year, used batteries submitted to municipal governments will be sold to companies or institutions through auctions.

The used batteries will be stored at four centers built by the Ministry of Environment for the next 10 years, until private companies take over.

"Guidelines to evaluate the remaining life of the batteries haven't been completely finished but are at their last stage of development," said Namkung Hyun, deputy director of the resource recirculation bureau at the ministry. Namkung said the guidelines are being developed in collaboration with the Korea Automotive Recyclers Association and Korea Battery Industry Association.

"To prevent used batteries being sold at overly low prices, we are going to set a floor price depending on the quality of the used batteries." 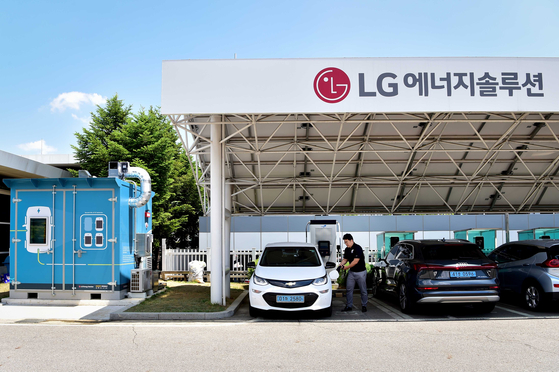 Electric vehicles are being charged from an ESS made of used batteries at LG Energy Solution’s Ochang factory in North Chungcheong. [LG ENERGY SOLUTION]