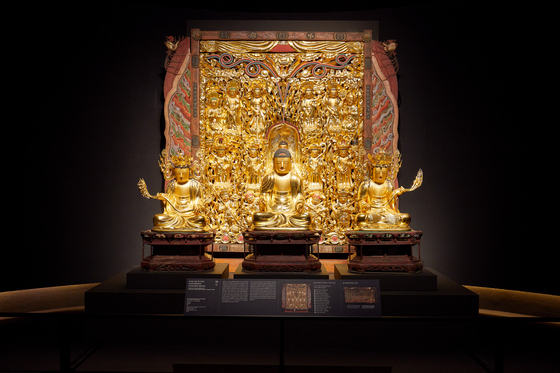 Wooden Seated Amitabha Buddha Triad and Wooden Amitabha Buddha Altarpiece of Yongmun Temple have left its temple in Yecheon, North Gyeongsang, for the first time in 337 years for the exhibition at the National Museum of Korea in central Seoul that sheds light on the Buddhist monk artisans. [NATIONAL MUSEUM OF KOREA]


Mentioning the Joseon Dynasty (1392-1910) during a conversation about Buddhist art may oftentimes only result in northing more than a big shrug.

In contrast to the works of the Unified Silla (668-935) and Goryeo (918-1392) dynasties, when Buddhist culture enjoyed its glory years both at home and abroad with full support from the ruling class, people often assumed that the quality of works created in the Joseon Dynasty, which heavily suppressed Buddhism, would no doubt be inferior.

But despite the unwelcoming circumstances, high quality works of art continued to be created inside the temples of Korea. Many of these “hidden treasures” have recently left their Korean temples, some of them for the first time in over 300 years, for the latest special exhibit “Monk Artisans of the Joseon Dynasty,” which kicked off its three-month run on Dec. 7 at the National Museum of Korea in central Seoul.

A total of 145 sculptures and paintings are on display, including two national treasures and 13 other treasures created by 366 monk artisans. 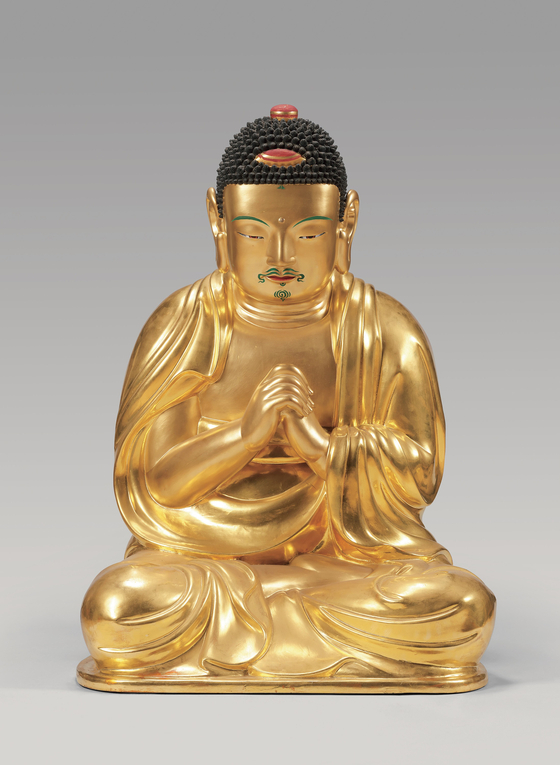 According to Kwon Kang-mi, a researcher at the museum who took part in organizing the exhibition, the main objective of the exhibit was to highlight the monk artisans of the Joseon Dynasty as both ascetics and artists.

“Museums in Japan are packed with visitors when they host exhibitions on renowned Buddhist sculptors known as busshi, such as Unkei and Kaikei, showing the Japanese public’s great interest in these producers of Buddhist art,” said Kwon. “In contrast, Korean monk artisans are almost invisible to the general public and are only known among Buddhist art professionals.”

According to Kwon, monks specializing in the production of Buddhist artwork emerged in Korea during the Three Kingdoms period (18 B.C.-A.D. 660), and their tradition continued through the Joseon Dynasty. During the late Joseon Dynasty, when Japan was gradually occupying Korea, these monk artisans formed communities, engaged in the reconstruction of Buddhist temples and produced almost everything needed within a given temple.

Min Byoung-chan, director-general of the museum, said that he wanted to take this opportunity to shed light on the monks who did not take credit for the tremendous work they did, equivalent to artisans, while allowing the public to witness the valuable Buddhist artworks that rarely leave the temples.

“The Buddhist temples of the Joseon Dynasty were like the museums and galleries of the present day in the sense that people came together to enjoy the beautiful works of art housed there and receive consolation,” Min said. “Monk artisans depicted the world of the Buddha through collaborative efforts after excruciating ascetic practice. The process of completing Buddhist projects involved participation by numerous people, with every participant fulfilling his particular responsibilities, similar to the process of setting up an exhibition in a museum. 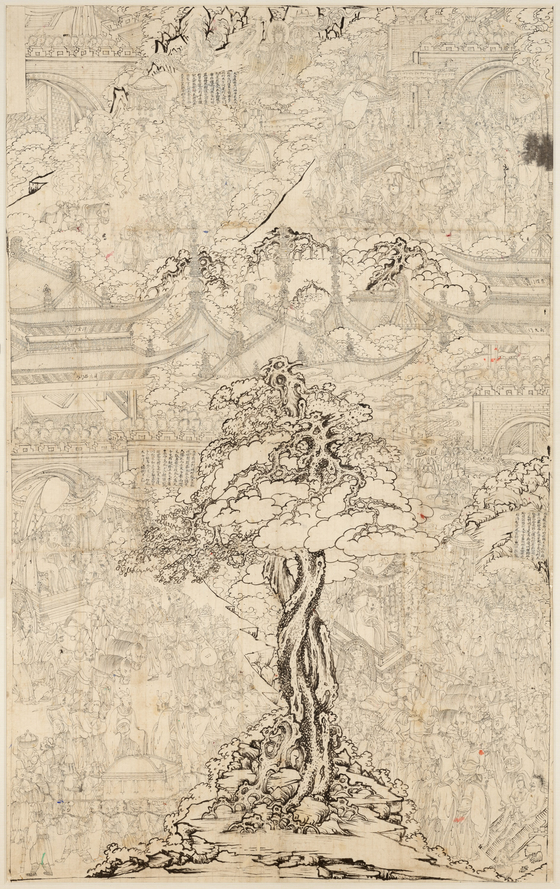 The underdrawing of Eight Great Events of the Life of the Buddha from Tongdo Temple is displayed next to the finished version for comparison. [NATIONAL MUSEUM OF KOREA] 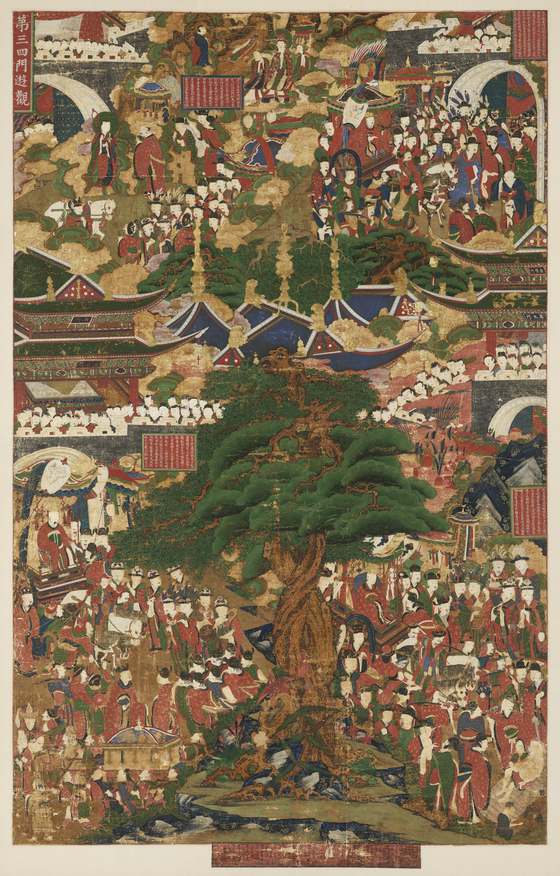 According to a postscript written on the lower part of the principal Buddha, the statues were carved in 1684 during King Sukjong’s reign. It was created by nine monk artisans, according to Yoo Su-ran, a curator of the exhibit, led by Daneung, a monk sculptor who was active in the mid and late 17th to early 18th century.

“It was common for Buddhist paintings to be displayed in the backdrop of sculptures, but this work broke that tradition,” Yoo said.

The Buddhist Painting of Songgwang Temple in Suncheon, South Jeolla, a national treasure which illustrates the Avatamsaka Sutra, is also being exhibited in Seoul for the first time.

“This painting beautifully illustrates the use of different colors in a well-balanced way,” said Yoo. "A group of 12 monk artisans including Hwaryeon, who was known as the ‘paintbrush hermit,’ was involved in creating this masterpiece in 1770. Here, the underdrawing and the painting of the Eight Great Events of the Life of the Buddha from Tongdo Temple are displayed next to each other for the first time."

The grand exhibit is divided into four parts. It starts off by introducing who the monk artisans were, then the visitors are led to see for themselves what the workshops in which these monk artisans worked looked like.

“For the monk artisans, creating works of art was not merely for producing yet another Buddhist statue or a scroll featuring Buddha illuminating the world, but an act of awakening humanity and attaining their own personal enlightenment by practicing the repeated action of sculpture and painting which we today refer to as Buddhist art. And they did this collectively,” Yoo said. 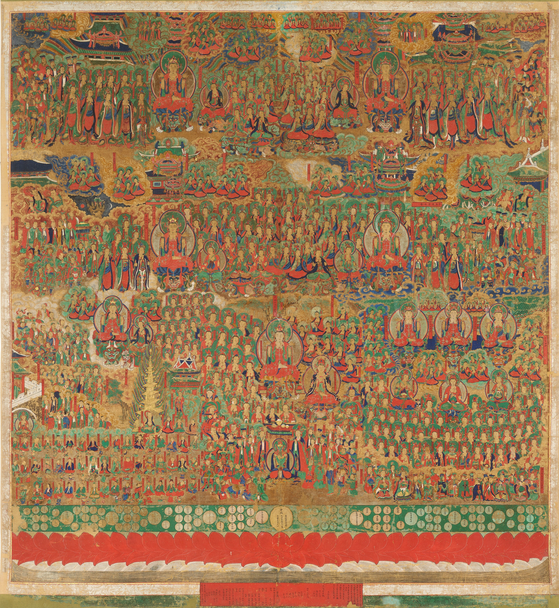 Illustration of the Avatamsaka Sutra (The Flower Garland Sutra of Songgwang Temple). It is a National Treasure created in 1770 by 13 monk artisans. [NATIONAL MUSEUM OF KOREA] 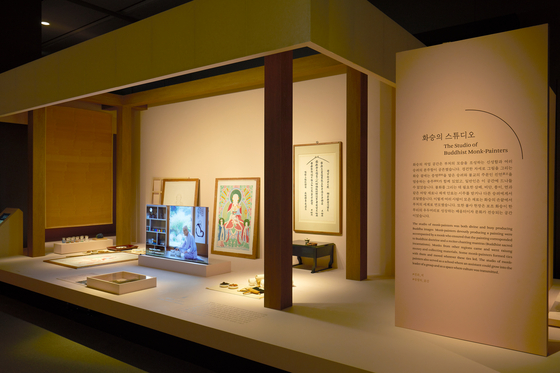 An example of a monk artisan's workshop, which for them was as sacred as the artwork they were creating. [NATIONAL MUSEUM OF KOREA]


“That is why these work places were kept as sacred places and the monks conducted various ceremonies and rituals such as bulbokjang, which is an act of dedicating or installing sacred materials to Buddhist artworks.” 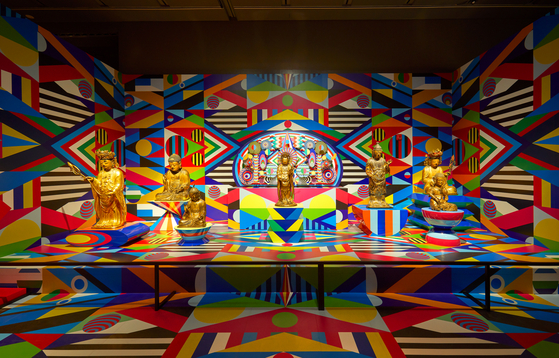 
The third section, titled “The World Dreamt of by Monk Artisans,” is where many of the masterpieces are on display. The final section displays works by nameless monk artisans. Seven of these Buddhist sculptures received an unprecedented spotlight during the exhibit as contemporary artist Vakki used the objects to create a new piece of artwork, “Walking a New Path.”