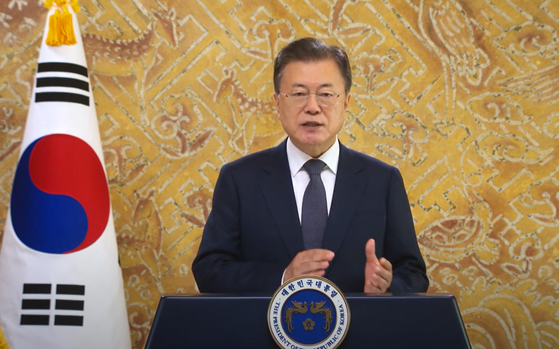 President Moon Jae-in said Friday that Korea is an "exemplary testament" to the value of democracy.

He made the remark at a virtual two-day summit hosted by U.S. President Joe Biden aimed at bringing together American allies and partners against authoritarian forces.

During the Summit for Democracy bringing together leaders from over 100 governments over Thursday and Friday, Moon said Korea "intends to prove that a genuine freedom is one enjoyed together with neighbors" amid the struggle against the Covid-19 pandemic and global efforts to return to normalcy.

"Korea is an exemplary testament to the value of democracy," said Moon "Although having undergone colonial rule and a war, we have developed in compliance with international free trade norms and become the first country that ascended to the ranks of developed economies from a developing country."

He referred to Korea's experience overcoming Japan's 1910-45 colonial rule and recovering from the 1950-53 Korean War which divided the peninsula.

"Every time authoritarianism suppressed the Korean people, they protected democracy and moved it forward through peaceful civil revolutions. Korea will build on this experience and contribute to global democracy," he said.

Moon however noted that democracy is being "threatened from within."

He called out the dangers of fake news spreading rapidly through digital media and social networking services, "spreading hatred, populism, and extremism," sometimes even inciting people to refuse Covid-19 vaccinations.

He pointed to challenges such as social polarization, infectious disease and the climate crisis and mulled the importance of seeking solutions to "defend and advance democracy."

Moon stressed the importance of guaranteeing the freedom of individuals and freedom of expression, in harmony with "freedom for all." In efforts to combat fake news, he said that Korea will join efforts to project independent media around the world to work to encourage fact-checking and accurate reporting.

Korea will also work together with countries "in a way that minimizes Covid-19 disparities," said Moon, and will continue working with those disproportionately affected by the pandemic for job retention. It will also provide official development assistance for capacity building for women in developing countries and strengthen national efforts to promote human rights, he said.

"There is no bigger enemy than corruption," said Moon, noting that the "power of democracy emanates from people's trust in transparency and fairness."

The first Summit for Democracy, one of Biden's election campaign pledges, has faced controversy, with critics calling out some of the leaders included on the guest list and questioning whether the United States is an effective advocate for democracy.

"As a global community for democracy, we have to stand up for the values that unite us," said Biden in his opening remarks at the summit. "We have to stand for justice and the rule of law, for free speech, free assembly, a free press, freedom of religion, and for all the inherent human rights of every individual."

He called for concrete commitments on how to strengthen democracies and "push back on authoritarianism, fight corruption, promote and protect human rights of people everywhere."

Biden announced the establishment of the Presidential Initiative for Democratic Renewal to bolster democracy and defend human rights around the world. The United States plans to provide up to $424.4 million toward the initiative to support free and independent media, fighting corruption, advancing technology for democracy and defending free and fair elections and political processes.

Countries are expected to report back on the progress they make at next year's summit.

The summit was criticized by North Korea, China, and Russia, countries that were not on Biden's invitation list.

North Korea's Foreign Ministry in an English-language statement released Sunday said, "The U.S. should not use the American-style 'democracy' as a tool for interfering in the internal affairs of other countries. The American 'democracy' is not welcomed even by its citizens."

The summit came just days after the United States announced it will diplomatically boycott the Beijing Winter Olympics next February due to China's human rights abuses.