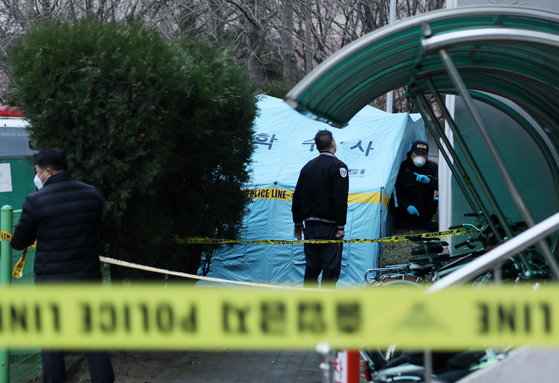 Police investigate the site where the body of Yoo Han-gi, a former employee at the Seongnam Development Corporation, was found in Goyang, Gyeonggi last Friday. [YONHAP]


Both ruling and opposition presidential candidates blamed each other for the lack of progress on a special counsel probe bill to examine the Daejang-dong development corruption scandal following the death last Friday of a former employee of the public development corporation that spearheaded the project.

The death of Yoo Han-gi, head of Pocheon Urban Corp. and a former division manager at the Seongnam Development Corporation when the controversial project was launched in 2015, prompted renewed calls from ruling Democratic Party (DP) candidate Lee Jae-myung and main opposition People Power Party (PPP) candidate Yoon Suk-yeol to call for a probe to get to the bottom of the allegations surrounding the development, which has been mired in allegations of influence peddling and bribery.

Hwacheon Daeyu is a small asset management company at the heart of the scandal that is being investigated by prosecutors for its outsized profits in the Daejang-dong development in Seongnam, Gyeonggi.

Its outsized profits from the development have sparked a months-long probe by prosecutors into those suspected of rigging the project’s shareholder composition and profit distribution scheme in favor of the previously little-known company, its affiliates and their owners.

Yoo, who denied the allegations, was scheduled to attend an arrest warrant review to take place at the Seoul Central District Court on Dec. 14.

Hwacheon Daeyu’s owner Kim Man-bae, a former journalist who interviewed the DP candidate when he was Seongnam’s mayor, and Yoo Dong-gyu, a former acting president of the Seongnam Development Corporation and political aide to Lee, have both been arrested in connection to the scandal.

Although Lee expressed “great sadness” over the death of Yoo Han-gi, which appears to have been a suicide, he also blamed his PPP rival for the impasse between the DP and PPP in the National Assembly over a special counsel probe bill to look into the scandal.

Lee previously said that he would accept a special counsel probe into the Daejang-dong development in Seongnam, Gyeonggi, where he built his political reputation as the city’s mayor from 2010 to 2015, on the condition that the probe also addressed allegations that Yoon covered up early signs of corruption in the development back when he was in the state prosecution service and that the PPP-controlled Seongnam city council prevented the project from relying solely on public money in order to benefit private investors.

On Saturday, Yoon hit back at the DP candidate’s accusation that a special counsel probe has been delayed because he and the PPP want a selective investigation only into the suspicions against Lee.

“A special counsel probe can be easily arranged if the party with 180 parliamentary seats agrees to a pass a bill in cooperation with the opposition,” the PPP candidate said in reference to the DP’s current majority coalition in the National Assembly.

While the two candidates’ approaches to a potential special counsel probe differ, there are signs that Yoo’s death has given impetus to both parties to make it a reality.

While the PPP has long called for a counsel probe into the scandal since it broke in September, the DP may also acquiesce to such an investigation as the allegations surrounding the scandal continue to linger over Lee’s campaign.

One DP campaign official who spoke to the JoongAng Ilbo on the condition of anonymity said, “I think Lee has decided that he has to stem the allegations surrounding the Daejang-dong development. While it will be a burden for the party ahead of the election, we cannot avoid it any longer, so it’s best to face it head-on.”