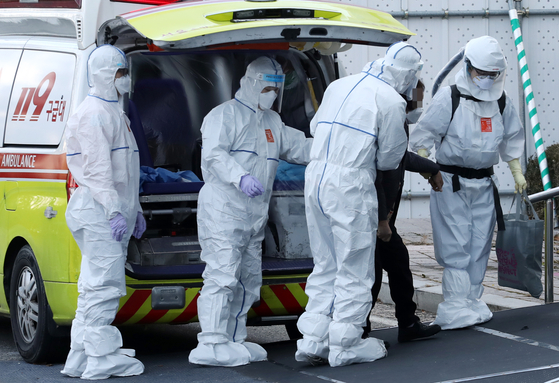 A medical team from Seoul Medical Center transfers a Covid-19 patient to a hospital in Jung District, central Seoul, on Sunday. The number of critically ill patients reached an all-time high of 894 on Sunday, according to the Korea Disease Control and Prevention Agency. [YONHAP]


The number of critically ill patients in Korea hit a record 894 on Sunday, close to the hospital system's breaking point.


An additional 43 deaths were reported on Sunday, according to the Korea Disease Control and Prevention Agency (KDCA), bringing the death toll to 4,253. Sunday's figure follows 80 deaths reported Saturday, the highest number since the Covid-19 pandemic began.

The rate of occupied I.C.U. beds surpassed 80 percent for the first time on Saturday.

With the number of critical cases rising rapidly, doctors say that hospitals are already operating at full capacity.

“The reality is that hospitals are so full right now that patients who have received CPR in the emergency room cannot be admitted to the hospital because there is simply no room for critical patients,” said Um Joong-sik, an infections disease doctor at Gachon University Gil Medical Center, at a press conference Thursday.

“At this rate, 100 percent of beds for critically ill patients will be full sometime next week.”

A total of 1,739 people that have tested positive for Covid-19 in the greater Seoul area were waiting for a sickbed on Saturday.

Of those on standby, 517 were over the age of 70 and 1,222 had underlying medical conditions, such as high blood pressure and diabetes.

“With so many Covid-19 patients having to wait at home, people may start dying without receiving proper medical treatment,” said Um.

To expand the number of I.C.U beds, the government issued its fourth administrative order on general hospitals on Friday. Following the order, an additional 1,658 sickbeds and 241 I.C.U. beds are expected to open up.

Despite the drop, Sunday's figure was still a record high for a Sunday count. The daily caseload tends to be lower during the weekends because less people get tested.

Of the new infections, 4,989, or around 75 percent, were reported in the greater Seoul area.

Fifteen cases of the new Omicron variant were reported Sunday. Of them, four cases were from overseas — two from the Democratic Republic of Congo and one each from the United Kingdom and Russia.

The total number of people infected with the Omicron variant in Korea now stands at 90.

In an effort to curb infections, the government is pushing to speed up its booster shot campaign by shortening the interval between vaccinations and booster shots.

Starting Monday, adults over the age of 17 who received their second jab three months ago will be eligible to register for a booster shot.

Reservations can be made starting Monday on the website (ncvr.kdca.go.kr). Inoculations will begin Wednesday.