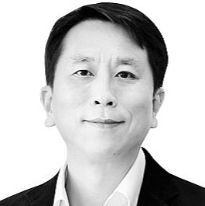 The author is the head of the Post-silicon Semiconductor Institute of the Korea Institute of Science and Technology (KIST).


The new £50 note, available since June, features the face of Alan Turing, who is credited with shortening World War II with his pioneering work in code-breaking, computing and artificial intelligence (AI). AI has become familiar in Korea through its defeat of human champion Lee Se-dol in the ancient board game of Go in 2016 and the release of Tesla electric vehicles with automated systems in 2018.

AI has become an everyday word among ordinary people as well as companies and governments. It is at the center of almost every social and economic agenda, although its use in everyday life remains restricted. Despite the limitations, few would argue with the limitless potential and explosive socio-economy ramifications of machine learning.

Chips have never been under such a big spotlight as theya re today. They have been at the center of a hegemonic tech war between the United States and China — and also after Japan curbed exports of key materials in wafer production to Korea that contribute to 30 percent of its gross domestic product.

Samsung Electronics-proposed method of producing neuromorphic semiconductors is based on copying a neuron map and pasting it onto memory chips. [NATURE ELECTRONICS]

Korea is a global chip powerhouse. But it does not excel in all chips. There are a lot of different types of semiconductor. Korean names are dominant in the memory chip category. But the non-memory sector is three times bigger than the memory sector.

As underscored by the impact of chip shortages on bitcoin mining, current chip production requires enormous electricity. Given the pace of growth in chips, the world may need 100 million fossil fuel power stations by 2040 to roll out enough chips. When AI employment increases, more electrical energy would be needed. Without radical innovation in chipmaking, the mass-adoption of AI will not be possible.

As a result, chipmakers are engrossed in developing AI-focused chips which require less power to use. Neuromorphic chips that mimic the activity spikes that occur within the human brain are an example. Human brains are the most energy efficient and powerful computer, and can process information and store it instantly with more than 100 billion neurons communicating with one another via more than 100 trillion synapses that connect them. Development of the cup is still at the fledging stage. Since there is no clear leader in the field, it could be an infinite market.

Korean chipmakers have “miraculously” managed to keep a comfortable lead over the competition in the memory market. They, however, have been unable to catch up with U.S. chip companies in system chips. They may finally have a chance with the arrival of the game-changing chip.

The chip market runs on a winner-take-all rule because you cannot survive without preemptive investment and technology. Korea cannot indulge itself in memory dominance. The country and industry must concentrate its capabilities on developing energy-efficient chips for AI applications.

Building an ecosystem is also important. Next-generation chips cannot be achieved without close collaboration between the neuron science and engineering fields. Without bold and future-oriented investment, Korea cannot keep its leadership in the new chip order.